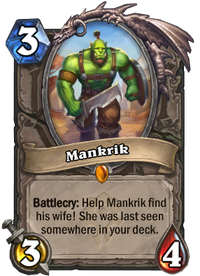 Battlecry: Help Mankrik find his wife! She was last seen somewhere in your deck.

Relives his nightmare every day a new Horde player is created.

Mankrik is a legendary neutral minion card, from the Forged in the Barrens set.

Mankrik can be obtained through Forged in the Barrens card packs, through crafting, or as an Arena reward.

Mankrik and his wife Olgra battled quilboars in a small tauren camp when they were separated by the overwhelming numbers. As he saw his wife being overwhelmed by newcomers, rage came over him as he turned to face his enemies, but they brought him down easily with their vast numbers. He later awoke to a tauren druid tending his wounds — the druid had come across him on the Gold Road as he fell. Filled with uncertainty whether his wife was still alive or not, he stood at the Crossroads every day scouting the horizon for more quilboars to quench his bloodthirst.

He later managed to retrieve the corpse of his wife and bury her, raising a humble monument in her honor. However his thirst for their blood had still not been quenched, killing every quilboar he'd seen since they murdered his wife and burned down his homestead. Still not satisfied with the slaughter of the quilboar at Thorn Hill, he later traveled to the Southern Barrens, realizing that there will be no peace without his wife, wanting to see their very homes razed. It's then hinted that Mahka helps him to settle with his troubles and may be romantically involved.