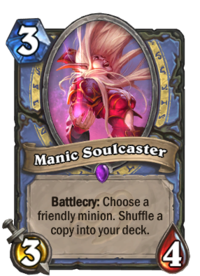 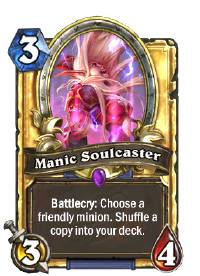 Battlecry: Choose a friendly minion. Shuffle a copy into your deck.

When casting a tournament, you really have to put your soul into it!

Manic Soulcaster is an epic mage minion card, from the Mean Streets of Gadgetzan set.

Manic Soulcaster can be obtained through Mean Streets of Gadgetzan card packs, or through crafting.

At only 3 mana you will be able to combine this with most minions the same turn. Especially useful with key cards like Archmage Antonidas.

Manic Soulcaster is also useful in highlander ("no duplicates") decks for providing multiple copies of cards. Since the target card has already been drawn from the deck, Manic Soulcaster's effect shouldn't break the requirements of cards like Kazakus or Inkmaster Solia - as long as you don't copy the same minion twice. As an aside, copying Kazakus or Inkmaster Solia themselves twice using this card will allow you to use the card you copied just fine once you draw it, since you will leave only a single copy of either in your deck the second you draw one copy. Do note that other cards you might have in your deck with the same prerequisite, such as Reno Jackson will not work while this is in effect.

Summon
It only cost my soul.