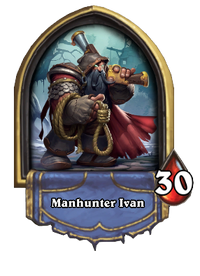 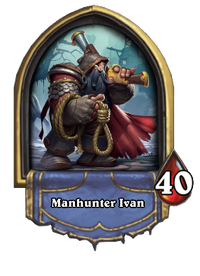 Watch your step, this traitor is an expert trapper.

Manhunter Ivan is a boss that can be encountered during the Monster Hunt.

Play it slow and easy, don't be over confident. Relying more on your cannons is best.

Toki's hero power becomes the most useful of the four in this fight as you can activate traps and rewind time.

With Tess, you can use your hero power to gain traps yourself.

Hagatha the Witch
Ivan was once one of yours. Now he is mine.

Tess Greymane
Ivan! You're coming with me.
Manhunter Ivan
Yer on my list, Greymane. An' yer father's next

Houndmaster Shaw
You were one of us, Ivan!
Manhunter Ivan
I'm nothing like you, Shaw. I don't take to lost causes.

I said no tricks, Gnome!

I've seen that one before.
Two can play at that game.
Ya think you're tricky, eh?

Tools of the Trade

Some of those weapons were mine, missy.

Manhunter Ivan
Hagatha put a price on your head, you know.

Manhunter Ivan is original to Hearthstone. He was once an ally of Toki, Tess, Shaw and Darius, but betrayed them for Hagatha. Additionally, either the Handgonne, the Blunderbuss or the Stake Thrower, or 2 of them, were once his.