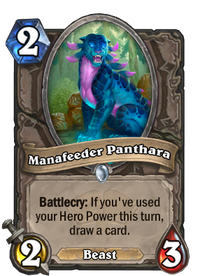 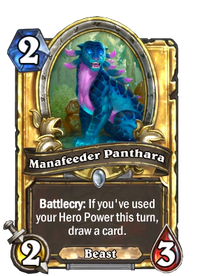 Battlecry: If you've used your Hero Power this turn, draw a card.

Feeds on mana, crystal kibble, and whatever it was you were just snacking on.

Manafeeder Panthara is a common neutral minion card, from the Scholomance Academy set.

Manafeeder Panthara can be obtained through Scholomance Academy card packs, through crafting, or as an Arena reward.

A decent card for Demon Hunter, who can play it as a 3 mana 2/3 that draws a card. It can also be useful as a late-game drop for Face Hunter, since they can use its Beast type and will usually be using Steady Shot every turn. The effect is generally too slow for other classes. However, Manafeeder Panthara does have synergy with Hero cards and other generated hero powers that encourage you to use your hero power each turn, like Heart of Vir'naal and Emperor Wraps.

The panthara are cat-like beasts from Argus. They have scales covered in mana-sensitive particulate. They are solitary creatures and devour energy to survive. Energetic apex hunters of Argus, the panthara hunt by sensing the energy within living things. A panthara approaching a powerful energy source will visibly change color and become more excited. They change color based on mood. The Luminous Starseeker demonstrates the ability to grow feathery wings, but no other panthara have been seen doing this.