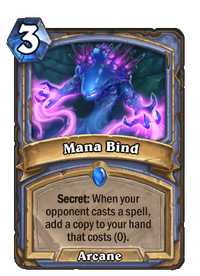 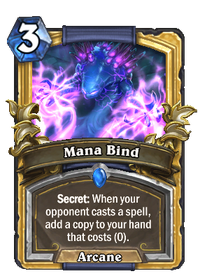 Secret: When your opponent cast a spell, add a copy to your hand that costs (0).

Mana Bind is a rare mage spell card, from the Journey to Un'Goro set.

Mana Bind can be obtained through Journey to Un'Goro card packs, or through crafting.

Example: If your opponent plays Loatheb after your Mana Bind has triggerd, the generated spell card in your hand will have a mana cost of 5.

This card acts as a Mirror Entity for your opponent's spells. As an added bonus to Mirror Entity, the resulting spell cannot typically be stopped by your opponent, unlike the copied minion, which they can kill off. Much like Mirror Entity, your opponent can counter this secret by playing a low-value spell like The Coin or Razorpetal before anything too powerful, or worse, conditional spells that are almost or completely unusable for mages like Shield Slam and Deadly Poison. This card becomes extremely powerful when it copies high-cost cards like Siphon Soul, Mind Control, Brawl, or Sprint.

This card synergizes with Open the Waygate, creating a new spell for you to cast.

Remember that casting a copied spell with Atiesh equipped or while a Summoning Stone is on the board generates a random 0-cost minion, not a minion of the original cost of the copied spell.