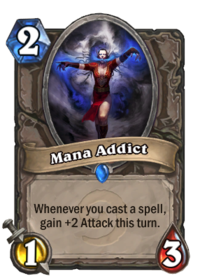 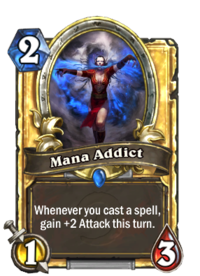 Whenever you cast a spell, gain +2 Attack this turn.

She’s trying to kick the habit, but still takes some mana whenever she has a stressful day.

Mana Addict is a rare neutral minion card, from the Classic set.

Play with low cost buff cards for some good cast-based burst damage. Note that The Coin counts as a spell.

Summon
I can taste the mana!

Attack
What a rush!

Since the destruction of the Sunwell at the hands of Arthas and the Scourge, the blood elves have been forced to deal with the sudden relapse of their addiction to arcane energy. A constant curse since the original Well of Eternity was destroyed, the addiction has become more powerful than ever. Blood elves spend their waking days struggling with their weakness, seeking either to sate it by siphoning magical energy from their surroundings or to resist the urge to feed.

The Wretched are elves (usually blood elves) that failed to control their innate addiction to magic, overindulging in arcane sources to the point of deformity and, often, insanity. Obsessed with obtaining and devouring magic, they are a danger to both themselves and others, and are usually too violent to surrender.

The Wretched are thin elves with thinning dark hair, a large bony forehead, claw like fingers and toes, blue eyes, and strange growths on their backs that glow with an eerie blue light. With the recovery of the Sunwell and Kael'thas summoning the Burning Legion, a new type of Wretched appeared. After the events of the War against the Lich King, some high elves also became Wretched. 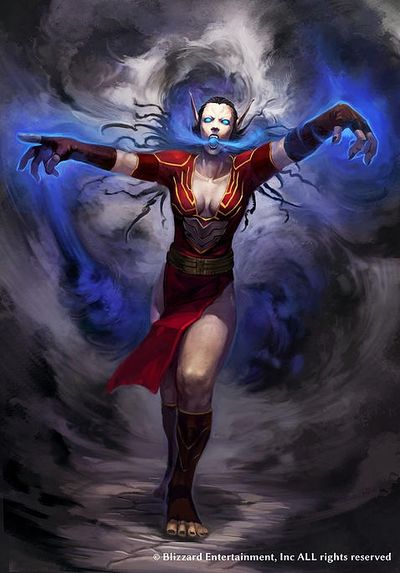