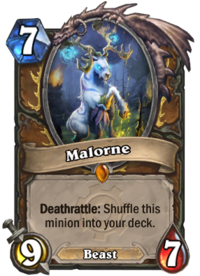 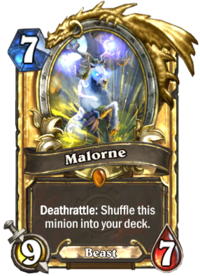 Deathrattle: Shuffle this minion into your deck.

When Malorne isn't mauling hordes of demons, he enjoys attending parties, though he prefers to go stag.

Malorne is a legendary druid minion card, from the Goblins vs Gnomes set.

Malorne can be obtained through Goblins vs Gnomes card packs bought through the ingame Shop, purchased online from the Battle.net shop, or through crafting.

Played in Ramp Druid as early as possible to bait Silence/removal or to play late for a recurring lategame threat, since cards like Coldlight Oracle, Grove Tender, Nourish, and Ultimate Infestation often thin these decks very quickly.

Can be used in a Jungle Giants deck to ensure that a weighty minion will always be available for free in the case of otherwise bad draws.

Summon
I have returned.

Trigger
I will return...

Attack
For the ancients!

Malorne, or Apa'ro, is an enormous white stag that roamed the land as protector of nature. His power lay in nature itself and he is responsible for the creation and nurturing of nature in the world. He is the father of Cenarius, who inherited his dominion over nature.

Furthermore, he was one of the first living beings in the world. By the time of his death, he had become one of Azeroth's most beloved and powerful demigods, and he was renowned for his wisdom. 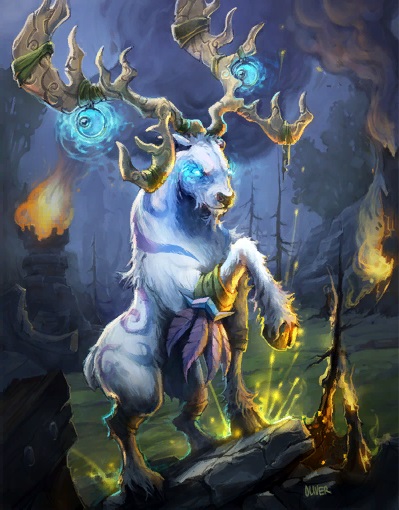