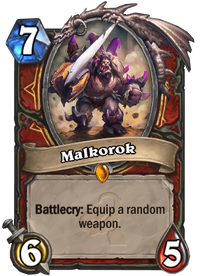 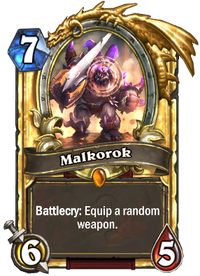 Garrosh's best buddy. It's true. Look it up.

For the boss card in Book of Heroes, see Malkorok (boss).

Malkorok is a legendary warrior minion card, from the Whispers of the Old Gods set.

Malkorok can be obtained through Whispers of the Old Gods card packs, or through crafting.

Malkorok's Battlecry is usually used in a scenario when the player does not have a weapon equipped. Malkorok generally represents decent value, since the average outcome is pretty good for the player using Malkorok, although the variance has increased over the years. Anything weapon that can deal 3 or more damage per turn is generally a good outcome with Malkorok, but there is a chance to get something useless like Skull of the Man'ari or even disasterous if you were unlucky enough to receive a Cursed Blade. Nevertheless, Malkorok will generally generate tempo and value for the player.

During the Year of the Kraken Standard year, there was a 4% chance to receive Cursed Blade. Such an outcome is unlikely, but completely devastating. Therefore, some seasoned players would consider not playing Malkorok when they are very far ahead, to avoid this card causing them to lose an essentially "won" game. For example, in a Control Warrior vs. Freeze Mage match-up, there is no need to play Malkorok, since that is one of the few ways by which you can actually lose the game.

This card has excellent synergy with cards such as Bloodsail Cultist in a Pirate-oriented deck, or Upgrade!.

The below table lists all collectible weapons available in Wild format. 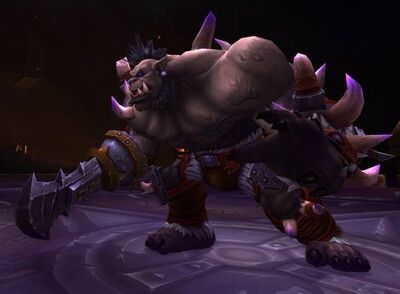 Malkorok after being infused with the power of Y'Shaarj.

Malkorok was Garrosh Hellscream's bodyguard and chief advisor, as well as the new leader of the Kor'kron. Malkorok has been Garrosh's most loyal and trusted lieutenant throughout the Pandaria campaign. When the Warchief needed a volunteer to infuse with the power of Y'Shaarj, it was only natural that Malkorok would offer without hesitation.

Malkorok resided within the Underhold during the Siege of Orgrimmar. After General Nazgrim's death above ground, Malkorok took over the defense of Garrosh's compound and attempted to hold the line. He was killed in the ensuing battle.