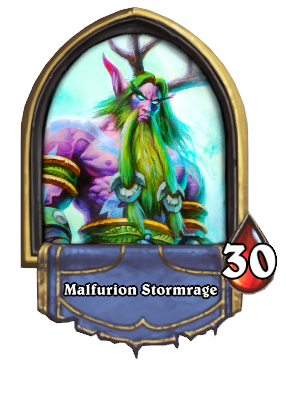 For the boss encounter in the returning player experience's missions, see Malfurion Stormrage (boss).
"I must protect the wild!"

The blessings of the forest lord Cenarius have made Malfurion Stormrage the epitome of what it means to be a druid.

Under the guidance of Cenarius – the demigod of nature and patron of druids – the venerable Malfurion Stormrage has protected the night elves from demonic invaders for millennia.

During the War of the Ancients, Malfurion was among those who defended all life on Azeroth from the terrible Burning Legion, along with his future lover Tyrande Whisperwind and his brother Illidan. After their victory against the demons, Malfurion saw to it that the night elves left the Legion's ravages behind, settling in a new home near Mount Hyjal and overseeing the growth of the World Tree, Nordrassil. The Aspect of Dreams, Ysera, linked Nordrassil to the Emerald Dream—a representation of Azeroth without war and interference from sentient beings—allowing all druids, including Malfurion, access to the realm. Malfurion and others explored the Dream for centuries.

Malfurion was awakened by Tyrande to aid the resistance against the Legion once more during the Third War; upon returning to his slumber, he battled his nemesis, the satyr Xavius, who was attempting to corrupt the Emerald Dream from inside. When Deathwing broke the world and stirred the rage of elementals during the Cataclysm, Malfurion left the night elven capital of Darnassus, and gathered his fellow druids to save Azeroth once more, creating a task force to stop the invasion led by the vicious firelord Ragnaros. With the Destroyer's demise, a finally wakeful Malfurion rejoined Tyrande to support the efforts of the Alliance.[1]

Time weathered and powerful, Malfurion Stormrage was the first night elf druid, and trained under the tutelage of one of the most powerful demigods of Azeroth in the days of yore.

Ten thousand years into Azeroth’s past, Malfurion Stormrage was the student and brightest scholar of the demigod Cenarius, Lord of the Forest. As the years passed under Cenarius’ wise instruction, Malfurion became the first druid, able to use the powers of nature to the Kaldorei’s benefit. Druidism became an integral part of Malfurion’s people directly through his guidance.

Malfurion and his people were called the Kaldorei, or “children of the stars”, and were nocturnal, cunning humanoids. Malfurion deeply loved one of his fellow Kaldorei, Tyrande Whisperwind, the high priestess of Elune. However, Malfurion’s twin brother, Illidan Stormrage, also fell in love with Tyrande, but his feelings for her were unrequited.

Malfurion admired and respected the ruler of the Kaldorei people, the venerated Queen Azshara. Azshara was powerful, charismatic, and beautiful beyond compare. Over the ages, Azshara’s confidence evolved into extreme narcissism, her cunning dipped into madness, and her lust for power became all consuming. She surrounded herself with the most powerful, skillful, and wealthiest of the Kaldorei, those that were worthy of being in her presence, and named these people the Highborne.

Malfurion watched as his queen slipped into madness, and knew that at the heart of her obsession with power was the Well of Eternity. To an extent, he was correct—the abuse of the powers that the Well of Eternity offered caught the attention of the ruler of the Burning Legion, the dark titan Sargeras, who saw that Azshara and her chosen Highborne could be easily manipulated by their hunger for power.

Beguiled by the machinations of Sargeras, Azshara used the powers of the Well of Eternity to open a portal between Azeroth and the Twisting Nether, where the armies of the Burning Legion lay in wait. When the portal between the two worlds opened, the demonic army of the Burning Legion devoured everything in their path, seeking to drain the energy from Azeroth itself.

Realizing the Kaldorei needed to be saved from the imminent demonic invasion, Malfurion led his people against the forces of the Burning Legion. Malfurion, Illidan, and Tyrande sought the assistance of Cenarius, hoping the demigod would provide them with aid. But, the demonic armies that poured from the Twisting Nether were seemingly endless, and even the assistance of both Cenarius and Alexstrasza the Dragon Queen alongside the forces of the Kaldorei could not save Azeroth. Malfurion decided that for the good of the world, the portal would have to be destroyed. If doing so affected the Well of Eternity, then so be it.

However, Azshara was ready for Malfurion’s strike against the portal. Her immense magical power tore through Malfurion’s army, and things looked hopeless for the Kaldorei — Tyrande had fallen in battle, Illidan had betrayed his people, and Malfurion faced off against the demons of the Burning Legion in a battle of arcane magic versus the power of druidism.

As Malfurion’s battle against the Burning Legion raged on, the portal that spanned the two realms in the Well of Eternity grew increasingly more unstable. Malfurion’s last, desperate spell would tear the demons from the soil of Azeroth and send them hurtling back into the Nether, but would also take the land, Azshara’s palace, and everything surrounding the Well with it. Sargeras panicked, seeing his opportunity to enter Azeroth coming to a violent end and attempted to enter the world via the unstable vortex only to become trapped between the Twisting Nether and Azeroth. The flux of conflicting energies collapsed the unstable portal and caused a catastrophic explosion that destroyed the Well of Eternity and changed the face of Azeroth forever — The Sundering.

Malfurion and Tyrande survived the explosion and left the ruins of the Well of Eternity. Led by Cenarius, they sought a new home for their people. Before they had ample time to rebuild and settle on a safe haven, Malfurion discovered that his brother had water from the Well of Eternity and was seeking to rebuild the Well in a lake atop Mount Hyjal. Fearing a second Sundering would destroy Azeroth, they did not try to outright destroy this second Well of Eternity, but instead began taking great efforts to protect it from harm. 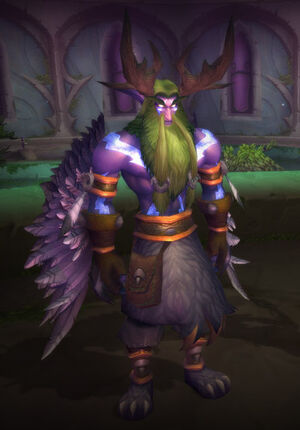 Malfurion in World of Warcraft

Malfurion imprisoned and warded his brother below Mount Hyjal while working alongside the Dragon Aspects Alexstrasza, Nozdormu, and Ysera to build a means to protect the new Well of Eternity. Their collaboration resulted in the creation of Nordrassil the World Tree over the waters of the well. Malfurion, the Kaldorei druids, and the Green Dragonflight pledged to protect the World Tree as long as they lived, and in return, the Tree would be linked to the druids that safeguarded it. In order to begin the process of rebuilding their home, the druids would have to spend hundreds of years at a time in slumber, traversing the Emerald Dream — the spiritual verdant realm of the Green Dragonflight that would help them rebuild Azeroth after the Sundering.

Ten thousand years passed before the Burning Legion became an imminent threat to Azeroth once more, forcing Tyrande to awaken Malfurion from his mystical slumber. Demons led by the Eredar Lord Archimonde sought out the Well of Eternity to reopen the portal between Azeroth and the Twisting Nether. Archimonde wanted the powers held beneath the World Tree for his own, which would give him abilities that would rival Sargeras’ own.

Archimonde’s ascent of Mount Hyjal was met with fierce resistance from numerous forces, including Tyrande’s, human forces led by Jaina Proudmoore, and orcish forces led by Thrall. Archimonde and his lieutenants tore through the camps set up to defend the World Tree, until Archimonde himself approached the Tree and prepared to take its powers for his own. Overconfident after his victory over the assorted armies that lay in waste behind him, he was unaware of Malfurion awaiting him at the World Tree.

Malfurion sounded the Horn of Cenarius and summoned thousands upon thousands of the ancestral guardians of nature known as wisps to his aid. The wisps assaulted Archimonde relentlessly and detonated their magical energy in an explosion that annihilated the Eredar Lord, shattering the World Tree. The impending invasion from the Burning Legion was brought to an end once more.

Malfurion continues to be a protector of both the Emerald Dream and Azeroth, battling against ancient and familiar enemies, such as Azshara’s demonic advisor Xavius, to protect his people. His wisdom and experience as a druid have been honed to a fine point over the course of more than 10,000 years, and he continues to lead the night elf people to this very day alongside his beloved wife.[2]

When viewed in the Collection, Malfurion has the following flavor text:

The lord of the night elves is a wise and noble leader. Yes, those antlers are real. 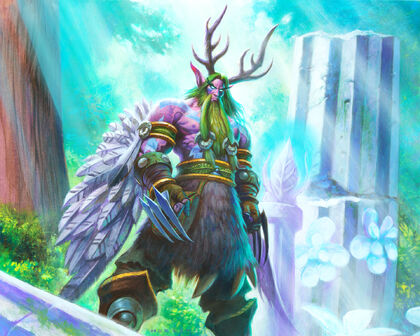 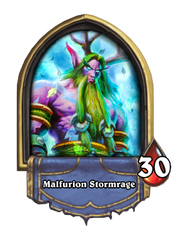