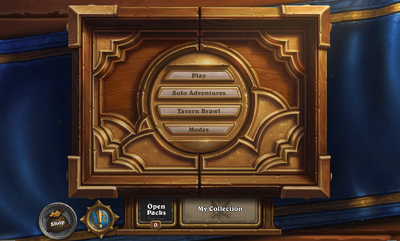 The main menu for Hearthstone is the central hub from which all main features of the game can be accessed, and the first screen the player arrives at when the game has completed its startup.

However, when first playing the game, players are initially presented with the Tutorial, which they must complete before reaching the main menu.

The main menu also features the common interface elements of the friends list and time display on the lower left, and the player's current gold total and Game Menu icon on the lower right.

The main menu's main functionality is to allow access to the various game screens. It also serves as backdrop for the Quest Log. Additionally, the number beneath the Open Packs icon can be checked from the main menu to see the number of unopened packs currently awaiting the player's attention.