Maiev Shadowsong is a hero that the player can pick in the Battlegrounds game mode. 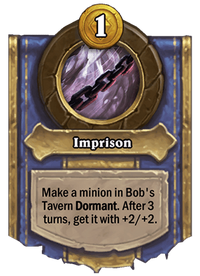 Maiev's hero power can be used to overload on minions much like Yogg'Saron and Rafaam. While it stunts Maiev's early game a bit, in the mid-game she can overpower most builds with her extra resources and stats. Later in the game, you can use the Hero Power to make safer investments on otherwise risky purchases, such as buying your second copy of Brann Bronzebeard or Baron Rivendare to wait on a triple, or just use it on a Freedealing Gambler, Murozond, or Tavern Tempest for a Gold profit.