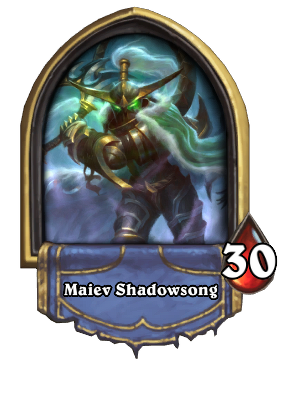 "For 10,000 years I have served as Warden of the Barrow Prisons. In that time only one has escaped, and you will not be the second. Abandon hope, for I am Maiev Shadowsong, and none shall flee my grasp!"[1]

Maiev Shadowsong is an alternate hero for the

The new Rogue Hero, Maiev Shadowsong, has emerged from the shadows, eager to become a part of your Hearthstone collection after 10,000 years of tolerating bad “You are not prepared” jokes from Illidan. Legion beware: Adding this vengeful Night Elf to your collection will be easier than teaching an old felhound new tricks. Just win 10 games of Hearthstone in Standard Ranked or Casual mode after the next expansion officially launches to acquire her. 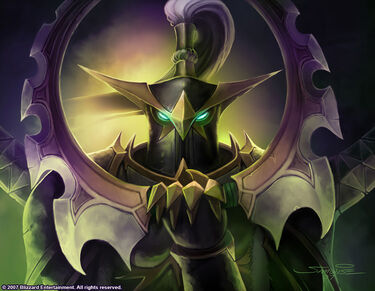 Maiev Shadowsong (pronounced MY-ehv) is a night elf Warden and former Priestess of the Moon. She grew up in the ancient Kaldorei Empire and eventually joined the esteemed Sisterhood of Elune, rising through its ranks to become a senior priestess. During the infamous War of the Ancients, around 10,000 years before the events of the First War, Maiev, along with her younger brother, captain of the Suramar Guard Jarod Shadowsong, played a major role in the fight against the Burning Legion, as part of the Kaldorei Resistance.

Shortly after the war's conclusion and the Resistance's victory, one of the night elves' most powerful champions, Illidan Stormrage, was arrested and put on trial for attempting to create a second Well of Eternity, ultimately being imprisoned deep underground. Maiev personally volunteered to act as the Betrayer's jailer, and took up the mantle of leader of the newly-formed Watchers, whose duty it was to guard the subterranean prison. For 10,000 years Maiev tirelessly guarded Illidan, until the day when one of the night elves' leaders, High Priestess Tyrande Whisperwind, entered the Barrow Deeps prison and freed Illidan in the hope that he could aid his people in resisting the return of the Burning Legion.

After Illidan was exiled in the ensuing war, Maiev took it upon herself to hunt the Betrayer down and return him to his cell in the name of justice. Maiev's anger and lust for vengeance continued to grow as she and her followers pursued the Betrayer to the Tomb of Sargeras, where she barely escaped with her life. She sought the aid of the night elven leader Malfurion Stormrage (Illidan's brother) and together they chased and engaged Illidan in the ruins of Lordaeron. Although somewhat redeeming himself by working with Malfurion to save Tyrande, Illidan was still just as guilty in Maiev's eyes, and she continued to pursue him as he retreated to the shattered world of Outland. 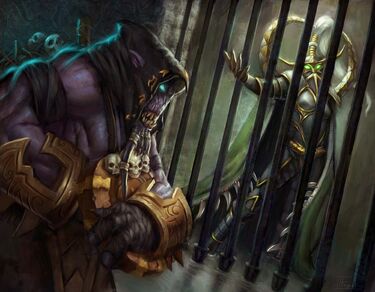 Capturing her prey but quickly losing him again to his allies — Prince Kael'thas and Lady Vashj — Maiev began a guerrilla war against Illidan's growing power in Outland, trapped and ever trying to recapture him with her depleted forces. Driven solely by revenge, the Warden eventually made allies, most notably the Broken leader Akama, a close ally of Illidan (who was now Lord of Outland) but who secretly resented the Betrayer's actions. Ultimately, Illidan used Akama to lure his archenemy into a trap where Maiev was herself captured and imprisoned in Warden's Cage in Shadowmoon Valley.

Eventually, however, Akama revealed himself to still be working against Illidan and, as the Alliance and Horde arrived to depose the Betrayer, Akama released Maiev and together they took part in the assault on the Black Temple. They ultimately confronted Illidan at the temple's zenith, where they succeeded in defeating and slaying him, although Maiev claimed to have felt no fulfilment with his death. She eventually rejoined her people in Darnassus, where she took on the role of a vigilante by attempting to slay resurgent Highborne and even Malfurion Stormrage himself, though her plot failed due to the actions of her brother, and Maiev fled.

Ultimately, Maiev has relocated to the Broken Isles where she is leading more of her Wardens, becoming very involved in the battle surrounding the Legion's third invasion.

Maiev is unavailable to new players. It's unknown if she will become available again.

Maiev became available to players after they won 10 games in Standard format Ranked or Casual Play mode during the Year of the Mammoth. Players who have been away from the game long enough to get the Return of the Hero quest chain will need to contact Blizzard support for help getting the Maiev quest before the Year of the Raven, as a bug causes her quest to be overwritten.

Once unlocked and selected for use, Maiev Shadowsong replaces Valeera whenever playing with a rogue deck. Maiev Shadowsong comes with her own portrait, emotes, and hero tray art, as well as featuring a special animation when using Maiev Shadowsong's Hero Power, Dagger Mastery.

When viewed in the Collection, Maiev Shadowsong has the following flavor text:

Dedicated to rooting out demonic corruption, Maiev once jailed Illidan for ten thousand years. And that was just his first offense.
Obtained during the launch of the Year of the Mammoth. 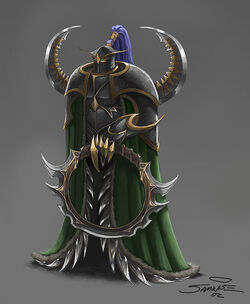