Maiden of the Lake

From Hearthstone Wiki
Jump to: navigation, search
Maiden of the Lake
Regular 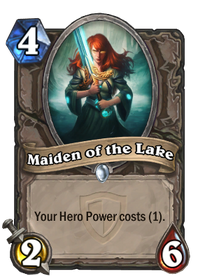 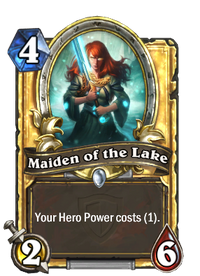 Not a good basis for a system of government.

Maiden of the Lake is a common neutral minion card, from the Grand Tournament set.

Maiden of the Lake can be obtained through The Grand Tournament card packs, or through crafting.

Since this card does not reduce the cost of your Hero Power by 1, but specifically sets the cost to 1 mana, additional Maiden of the Lake cards will have no increased effect. They can both keep the cost at 1 while alive; in other words, the cost will simply remain at 1 until the last maiden is eliminated.

Maiden of the Lake is a direct counter to Saboteur, who causes the enemy Hero Power cost 5 more the next turn. If it's the latest modifier Maiden's effect will take precedence, so playing Maiden of the Lake afterwards will nullify the increased cost and set it back to 1.

This card has synergy with minions with Inspire effects as it allows you to fit your Hero Power in a smaller mana pool, allowing for more constant repetition of the hero power. This does require the Maiden to avoid enemy 4-6 damage threats, which is hard to accomplish due to its low attack making for easy trades with 3 health minions, and there are often better 4-cost cards with more balanced stats. On the upside, with Inspire cards in hand while the Maiden is still on the board, there is more potential for an immediate Inspire following the ability coming into play.

Since this card replicates the Hero Power effects of Genn Greymane Even decks, without the restrictions, include some core cards as you would an Even deck and try and plant this minion on the board early and protect it.

Summon
I am freed from the curse.

Maiden of Ashwood Lake can be found on the edges of Ashwood Lake in Grizzly Hills as part of the Argent Tournament. Players on the quest A Blade Fit For A Champion" must use the Warts-B-Gone Lip Balm before blowing a /kiss to the Lake Frog critters around the lake. Blowing a kiss to the "right" frog (it's random) will spawn the Maiden, who players can then talk to to receive the Ashwood Brand. 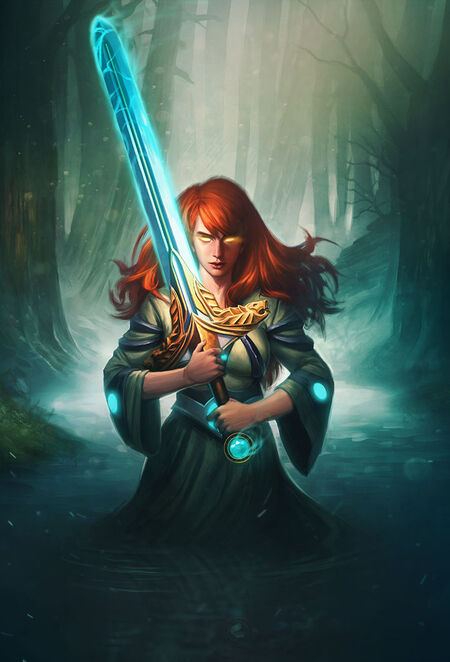 Maiden of the Lake, full art