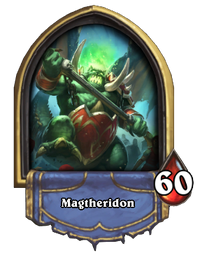 This pit lord is the self-declared "Lord of Outland." Undeclare him.

For the minion card in Ashes of Outland set, see Magtheridon. 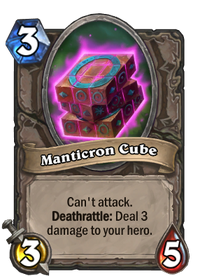 Release me, and perhaps I will grant you a merciful death!

I am free… now die!
Illidan! You will pay for what you've done to me! (vs. Illidan Stormrage)

I will be the end of you!
My power is now unleashed!
Who is the weak one now?!

I will never be held prisoner again!
I grow weary of waiting here. Concede now.

Bathe in their power!

You would dare use those created by my blood? Against ME?!

Keli'dan! I will destroy you!

A hallucination! Am I really free at all?!