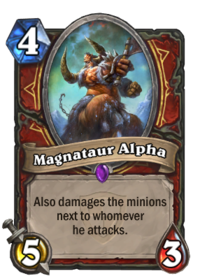 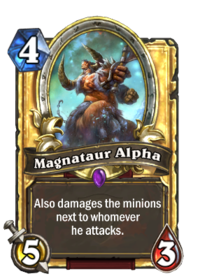 Also damages the minions next to whomever he attacks.

Playing him also gets you into the Magnataur Beta.

Magnataur Alpha is an epic warrior minion card, from the Grand Tournament set.

Magnataur Alpha can be obtained through The Grand Tournament card packs, or through crafting.

Although this minion has a good amount of attack it lacks Health and can be easily eliminated from the board before doing any damage. To counter this, a player can wait until turn 5 to use it with the Charge spell, as it boosts even more the destructive power of the Magnataur and can easily clear most of the enemy side of the board.

Magnataur are massive creatures that live in Northrend. They have the torso of a giant attached to the body of a mammoth; like the centaur and Keepers of the Grove, they are relatives of the demigod Cenarius. They are notoriously long-lived and rumored to engage in cannibalism when food is scarce. They are vicious, brutal, and uncaring; only the strongest and meanest survive. Despite their hostility towards all other races, they have become strangely tolerant of the arctic kobolds, who follow the magnataurs for safety and mutual benefit during hunts.

Magnataur live in prides, much like lions: one or two dominant males and several females along with their offspring. 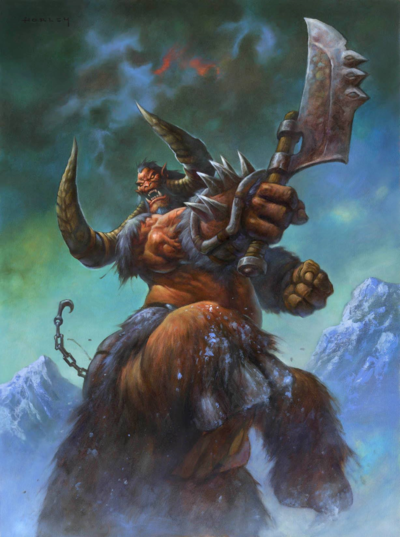