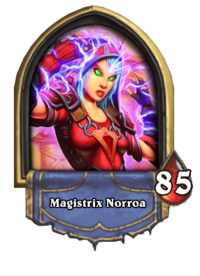 Magistrix Norroa is a boss that can be encountered during Chapter 5 of The Dalaran Heist.

Due to Norroa's Hero Power, cheap tactics such as infinite Swampqueen's Call are eliminated. Other than that, she uses a deck that is built on Secrets. Her Secrets can cause almost any of your actions to backfire, so it is really important to pay attention to the possible outcomes of literally anything you do.

Playing a weak minion before your strong one can protect the latter from Potion of Polymorph or Frozen Clone if Norroa will discover these secrets from Kalecgos and also weaken the effect of Mirror Entity. Try not to play powerful spells too early as Mana Bind and Counterspell could turn them in Norroa's favor or won't give you much value because of Spellbender.

If possible, try to attack weak enemies firstly, such as Kabal Lackey, Arcanologist and Sunreaver Spy. It minimizes consequence of Duplicate and Splitting Image.

Ice Block will certainly be one of the Secrets among Norroa's many others in Normal mode. As such, do not hesitate to go for the kill when you have the chance so that you can finish her off next turn.

Arch-Villain Rafaam
Take a deep breath for this one. You'll have to take your turns quickly in there.

Rakanishu
I've got time to burn.

Magistrix Norroa
Of boss
Don't worry, I'll make this quick.
Of player
Look at the time!
The clock is ticking!
You really don't have time to kill.

Magistrix Norroa
Have you given up?
Hurry, hurry, hurry!
My, my, I expected better.
Time waits for no one.
Too fast for you?
You've got to think fast.

Well, that's one way to give yourself more time.
Ah, I think I'll do that again. (cast by boss)