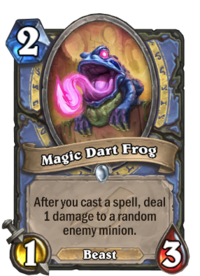 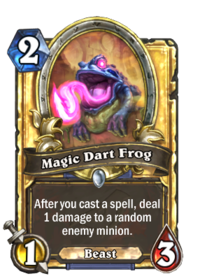 After you cast a spell, deal 1 damage to a random enemy minion.

There's a powerful throat in this frog.

Magic Dart Frog is a common mage minion card, from the Rise of Shadows set.

Magic Dart Frog can be obtained through Rise of Shadows card packs, through crafting, or as an Arena reward.

Magic Dart Frog behaves like a weaker, but cheaper, version of Flamewaker. It works best with cheap spells that can be activated in succession, such as Ray of Frost and Arcane Missiles. Keep in mind, though, that Magic Dart Frog's effect can only hit enemy minions, so be sure to plan around this. For example, if your opponent controls two 1-health minions and you have two copies of Frostbolt in your hand, your best target is the enemy Hero.