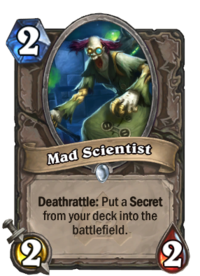 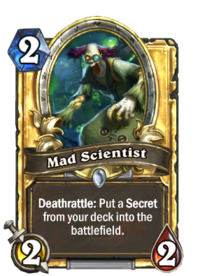 Deathrattle: Put a Secret from your deck into the battlefield.

His mother wanted him to be a mage or a warlock, but noooooooo, he had to go and be a scientist like his father.

Mad Scientist is a common neutral minion card, from the Curse of Naxxramas set.

As a Wild format card, both regular and golden versions of Mad Scientist can also be crafted for the following amounts:

Mad Scientist's Deathrattle will place a random Secret from your unused deck into play, removing the card from your deck.[1] However, it will not choose a Secret that you currently already have active, as it is not possible to have multiples of the same Secret activate at any time.[2]

As of January 2015, a known bug[8] allows Mad Scientist's Deathrattle to cause the player to exceed the 5 secret limit.[9][10] Mad Scientist still will not act upon duplicates of currently active secrets, but will put additional different secrets into play if available in the player's deck, essentially ignoring the 5 secret limit. This has been shown to allow at least 11 different secrets to be active on a hero at the same time. Secrets beyond the 5 limit will activate and take effect normally, and in the correct order.[11]

Mad Scientist is a very strong choice for any secret- or Deathrattle-oriented deck. 2 copies are commonly used even with as few as 3 secrets in the deck, especially for decks focusing upon the early to mid game.

Should the player remove all secrets from their deck before the Mad Scientist's Deathrattle can trigger, the Mad Scientist's value can quickly evaporate. This is particularly important for decks with low numbers of secrets. Despite this, as long as there are sufficient secrets in the deck to provide a good statistical chance of the Mad Scientist putting on into play, the minion can be considered a solid choice.

The threat of the secret put into play by the Mad Scientist can also be effective in affecting the opponent's plays, even if the player lacks the secret. However, be aware that a Mad Scientist that does not put a secret into play may provide the opponent with information regarding your remaining deck (see below).

The behaviour of this minion's Deathrattle means that should it fail to put a Secret into play, the controlling player therefore has either already drawn all of their remaining Secrets, or has only copies of existing Secrets left in their deck:

For example, if a player in Ranked play with 0 active secrets fails to gain a Secret from the Mad Scientist's Deathrattle, they have no Secrets left in their deck. If they have cards currently in their hand, the opponent can watch the position of those cards, and once they have all been played, can be sure the player has no other Secrets remaining this match.

While "mad scientists", often referred as doctors, can come in any race and certainly are not exclusive to the Forsaken and Scourge, the undead do have their own specific kind of mad scientist, typically male Forsaken alchemists who utilizes their on own strain of chemicals from tanks strapped to their backs. While some work with Sylvanas to create an even deadlier plague, several are in the employ of the Lich King or the Shadow Council. 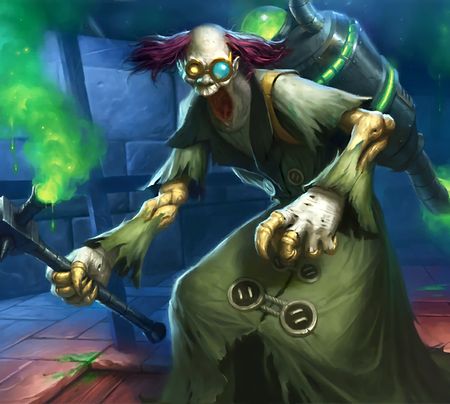