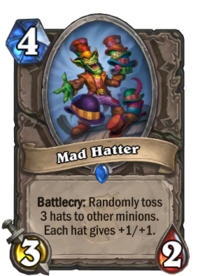 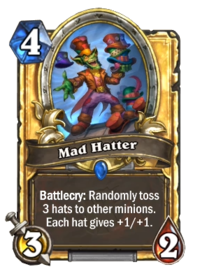 Battlecry: Randomly toss 3 hats to other minions. Each hat gives +1/+1.

He's entirely bonkers. All the best goblins are.

Mad Hatter is a rare neutral minion card, from the The Witchwood set.

Mad Hatter is comparable to his pyrotechnic cousin, but focused on buffing minions rather than damaging them. As such, this is more effective when you have more minions than your opponent. If you need a tiny push for Lethal, Mad Hatter could grant you just the extra boost you needed, denying your opponent the opportunity to use their free hats. In this way, it has the upside of guaranteeing that your minions will continue to be alive after the effect.

Mad Hatter also works well if your minions gain significant bonuses with these buffs, such as Paragon of Light and Immortal Prelate.

Summon
You get a hat, and you get a hat!
Attack
Hats! Ahahahaha!
Death
Ha-oh...