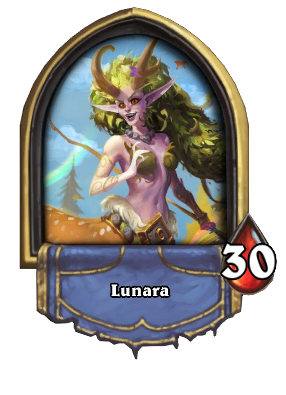 Lunara is an alternate hero for the 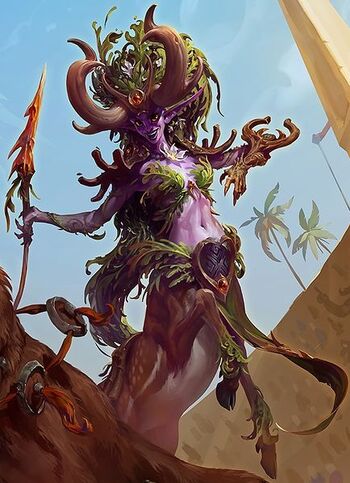 Lunara in Heroes of the Storm

Lunara is the eldest daughter of the demi-god Cenarius. While her sisters, the dryads, embody peace and the serene beauty of nature, Lunara’s apple didn’t fall far from her father’s tree—she’s a relentless defender of the wilderness and immortal proof that nature is red in claw and thorn. When your dad is a demi-god, and your grandparents are the goddess of the Moon and a god of the Wild, you’ve got a reputation to uphold. Lunara is more than up to the task.[1]

Lunara is a dryad located in the Dreamgrove in Val'sharah. She first appeared as a playable character in Heroes of the Storm, before being introduced in World of Warcraft: Legion and then in Hearthstone.

Lunara is unavailable to new players. It's unknown if she will become available again.

Lunara became available to players after they won 10 games in Standard format Ranked or Casual Play mode during the Year of the Raven.

Once unlocked and selected for use, Lunara is used as the hero whenever playing with a druid deck. Lunara comes with her own portrait, emotes, and hero tray art, as well as featuring a special animation when using her Hero Power, Shapeshift (or its upgraded version, Dire Shapeshift).

When viewed in the Collection, Lunara has the following flavor text:

The first daughter of Cenarius: fierce defender of nature and natural hair-care products.
Obtained during the launch of the Year of the Raven.

Lunara was released in celebration of the Year of the Raven.