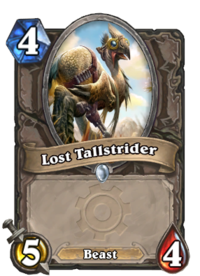 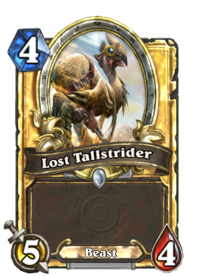 The message, "If found, please return to Mulgore," is tattooed on his rear.

Lost Tallstrider is a common neutral minion card, from the Goblins vs Gnomes set.

Lost Tallstrider can be obtained through Goblins vs Gnomes card packs, or through crafting.

A stat swap of Chillwind Yeti, the Tallstrider is vulnerable to Flamestrike, Soulfire, Bomb Lobber and other 4-damage nukes that the Yeti, and common tank minions like Sludge Belcher, can survive. It instead serves to kill those minions.

In a hunter deck, Call Pet can reduce its mana cost to 0, and it is especially strong with Tundra Rhino. Its Attack is high enough that most beast buffs are redundant.

If you don't need a Beast, Evil Heckler offers the same stats with Taunt.

A tallstrider, or simply strider, is a large flightless bird native to Kalimdor. A tallstrider's speed on open ground is unrivaled, so predators rely on stealth and pack tactics when hunting them.[1]