Lord of the Arena

From Hearthstone Wiki
Jump to: navigation, search
Lord of the Arena
Regular 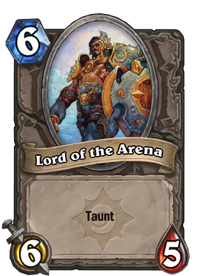 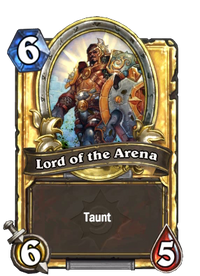 He used to be a 2100+ rated arena player, but that was years ago and nobody can get him to shut up about it.

Lord of the Arena is a neutral minion card, from the Basic set.

Two copies of Lord of the Arena are automatically included in all players' collections upon unlocking the priest class.

Two Golden copies of Lord of the Arena are a reward for raising a priest to levels 59 and 60.

Lord of the Arena is uncraftable and cannot be crafted or disenchanted.

Lord of the Arena is a reasonably strong and versatile minion, which can be useful for both offensive and defensive play. For 6 mana, he is an alternative to the Boulderfist Ogre, trading two points of Health for the Taunt ability, and is essentially a slightly improved Booty Bay Bodyguard, gaining +1/+1 for 1 additional mana.

It is not usually desirable to have a Taunt minion with an Attack higher than its Health. The reason for this is that such minions are susceptible to cheaper suicide attackers and direct damage spells, which can remove the minion without suffering additionally from its Attack. Ideally, high Attack minions are defended by Taunts with high Health, allowing each to perform its specialised function more effectively. Taunt on a high Attack minion prevents it from being protected by other Taunt minions.

For this reason, spending additional mana to gain a Taunt with a higher Attack can be a waste, especially if the Taunt is removed from the field before it has the chance to attack, or is easily defeated by the Attack of its target. In the case of Lord of the Arena, Sen'jin Shieldmasta has the same Health, in many cases allowing it to do just as effective a job as a Taunt, for 2 mana less. Smug Senior is another minion to consider, with more total stats than Lord of the Arena and better stat distribution (5/7 for the same 6 mana).

However, Lord of the Arena is a common sight in player's decks. One reason for this is his versatility. While a low Attack Taunt can be safely neutralised by a larger minion or ignored until it is convenient to deal with it, Lord of the Arena's 6 Attack demands attention, allowing him to serve as an attacking minion and strong end-game minion in his own right. As an attacking minion his high Attack is ideal for attacking the enemy hero, and his respectable Health gives him a good chance of removing two or more minions before being destroyed, as well as increasing his ability to survive the enemy's attacks, giving the controlling player more time to make use of him.

Summon
The gates are open! 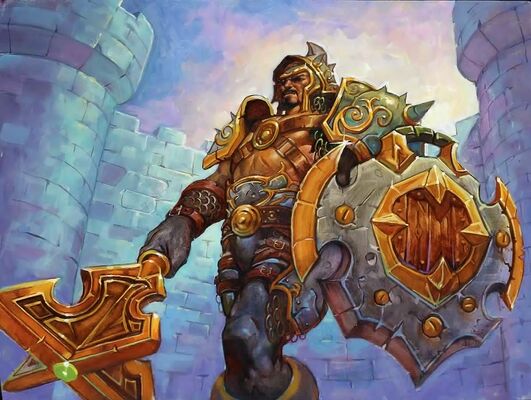 Lord of the Arena, full art