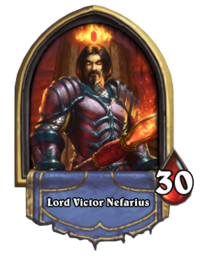 RAGNAROS WANTS YOU TO KNOW HE'S GOT YOUR BACK! 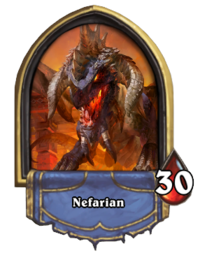 Lord Victor Nefarius is a boss encounter found in the Blackrock Mountain adventure. It is the fourth encounter of the adventure's fourth wing, Blackwing Lair.

While the initial boss is Lord Victor Nefarius himself, at the start of his first turn he will use True Form, changing into his dragon form and thus replacing himself with the Nefarian hero. This will also cause the boss to gain a significant amount of Armor, immediately set his mana to 10, and draw 2 additional cards for free.

As the Hero Power is on Auto-cast and it costs 1 mana, Nefarian will almost never be able to cast 10 mana spells (Pyroblast and Mind Control) gained by his Hero Power without additional effects such as Sorcerer's Apprentice.

Starting with turn 3, at the start of each turn Ragnaros will grant the player one of the following cards at random. In Heroic mode this happens only once, at the start of turn 3; the card is still randomly selected. 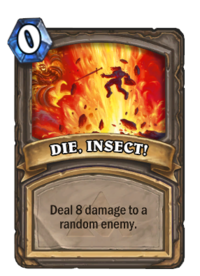 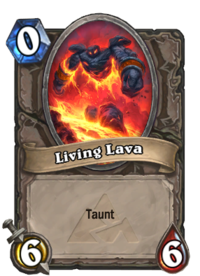 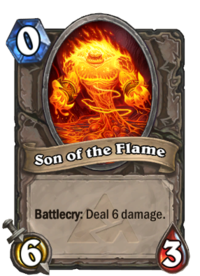 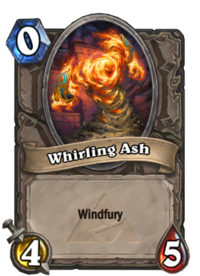 The Nefarius encounter sees the player pitched against the black dragon in an impossibly unbalanced fight. With 10 mana and a huge reserve of Armor, the player is hard-pressed to defeat Nefarian - until Ragnaros shows up to lend the player some aid. At the start of each turn the Firelord will grant the player one of several extremely powerful cards - DIE, INSECT!, Living Lava, Whirling Ash and Son of the Flame - in order to assist them in defeating his nemesis. With this endless supply of overpowered cards at your disposal, the main challenge is staying alive for long enough for your mana pool to grow, at which point you will be able to slowly overpower Nefarian due to your additional cards.

Note that using Saboteur on turn 1 will prevent Nefarian from transforming.[1]

The main difference between Normal and Heroic modes is that in Heroic mode, Ragnaros grants the player only a single card. After that, Nefarian steps in to stop Ragnaros from aiding the player further. Nefarian also sports a more substantial pool of 50 Armor.

One option to defeat him is to use a Priest deck, with Majordomo Executus being your only minion. His Hero Power has a chance of giving him Mindgames, which will then summon Majordomo to his board. Destroy Majordomo with Shadow Word: Death and finish the 8 Health Ragnaros hero with damaging Priest spells, or the special card given to you by the Ragnaros voiceover.

A Mill Druid deck is another effective option, partly due to the various ways Nefarius can inadvertently deck himself out - Nefarius will draw extra cards when revealing his true form, and Wild Magic can generate spells such as Nourish, Starfire and Tree of Life to ensure your longevity while stalling Nefarius' onslaught. The addition of the Grand Tournament set to the pool of cards means that Nefarius has a chance of playing Astral Communion, which not only forces him to draw an extra card but also empties his hand entirely.

Using numerous heavy board clears such as Doomsayer, particularly with other Warlock clears such as Hellfire and Demonwrath, can help to stabilize in the early game while cards such as Abyssal Enforcer can be an effective finisher. Typically if you can gain board control via repeated clears until the late game, your deck will be able to more effectively compete with Nefarian's as his main advantage is his head start on you. With board control, Lord Jaraxxus presents an excellent nail in the coffin as Nefarian has no way to beat out INFERNO! However, beware the small chance of Wild Magic giving him Sacrificial Pact. 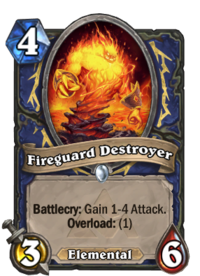 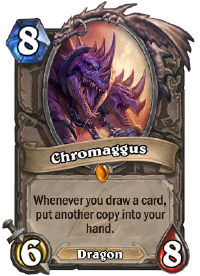 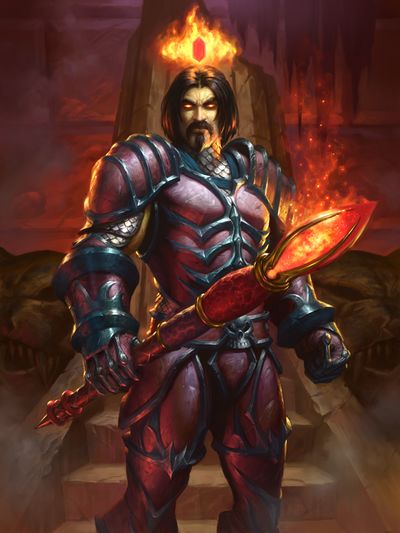 Ragnaros the Firelord
PSST! MORTAL! I'M NOT FULLY DEAD. I WILL SEND HELP SO YOU CAN DEFEAT NEFARIAN.

Nefarian
I am the master here!

Wild Magic, depending on player's class

Nefarian
Druid! The wild is mine to control!
The hunter becomes the hunted!
Mage! You should be more careful when you play with Magic.
Paladin! Does the Light forsake you?
Priest! The Light serves me now!
Rogue! Stop hiding and face me!
Shaman! The elements obey ME now.
Warlock! You play with magic beyond your understanding!
Warrior! Your strength becomes your weakness!
Your magic is mine! (other heroes)

Ragnaros the Firelord
ADVENTURER! LOOKS LIKE YOU NEED SOME HELP!
REVENGE WILL BE MINE! BY FIRE BE PURGED!
I AM SENDING MY MINIONS TO DESTROY YOU, BLACKWING!
TURN THIS POMPOUS DRAGON TO ASH!
YOU CANNOT DOUSE THE FLAMES OF THE FIRELORD!
I WILL HAVE MY REVENGE, DRAGON!
A GIFT FROM THE FIRELANDS!

Nefarian
No! No! I will destroy you!
This is cheating! I will not tolerate it!
No! NO! NOOOOOOOOOOOO!!!!

Preventing Ragnaros from assisting the player

Nefarian
Not in Heroic Mode.

Nefarian
No! NO! I will be baaaaaack! 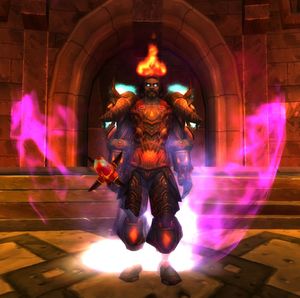 This fight's mirrors the original Nefarian encounter in World of Warcraft's Blackwing Lair. After transforming into his True Form, Nefarian will periodically inflict special effects upon all members of a specific class, such as instantly breaking all hunters' ranged weapons, casting paladins' Hand of Protection on Nefarian, or causing mages to randomly Polymorph other raid members.[2]

Nefarian, AKA, Blackwing, AKA Victor Nefarius, Lord of Blackrock. When he’s not smashing intruders with his sorcerous might, he enjoys long walks through his domain, the sound of victims sniveling in fear, and quality time on his throne. His family is known across the land for their wisdom, restraint, and humility. Psyche! His family tree includes some of the most hideously evil dragons Azeroth has ever known, including his sister Onyxia and their father, Deathwing. They’re all pretty much the worst kind of awful, but true to his name, Nefarian is, well, nefarious. Not only does he have that being a huge dragon deal going for him, he’s also cunning and manipulative, as evidenced by his not-so-friendly rivalry with the elemental Firelord Ragnaros (probably because they’re both really terrible neighbors). Neighborhood watch? More like neighborhood watch your back!

You need magic? Nefarian’s got magic aplenty, and he delights in using his enemies’ tools against them.

Nefarian really, really loves experiments—specifically mad experiments. He loves them so much that he’s had himself re-animated and is now back from the dead, fully ready to resume his twisted work. Being a very goal-oriented dragon, he’s outfitted another secret laboratory deep inside Blackrock Mountain, complete with sparking lightning coils, vats of questionable substances, and the sounds of draconic agony. Nefarian spared no expense in decking this place out with all the tools, materials, minions, and victims he needs to succeed. He even had his pad tricked out with amazing Dark Iron technology (Hint: It’s not a sound system, though that would be totally sweet).[3] 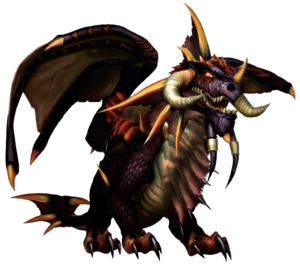 The black dragon Nefarian, son of Deathwing, claims the upper reaches of Blackrock Mountain as his own. Ruthless and cunning, Nefarian built Blackwing Lair as a home for the black dragonflight and his various experiments. It was also here that he concocted the ultimate army of home-cooked chromatic dragons, perfect for thwarting Ragnaros and his fiery minions that lurked under the mountain (Nefarian’s favorite pastime.)[4]

Victor Nefarius is super impressed that you made it this far, even if it really wasn’t part of his plan. All the same, he’s going to end you now. It’s nothing personal; he just thinks you’re an insolent, uppity, mortal interloper. Don’t let appearances deceive you -- there’s more to the Lord of the Blackwing Lair than meets the eye.[5]

Nefarian, also known as Blackwing, was the eldest son of Deathwing and his Prime Consort Sintharia. Like his father and his sister Onyxia, he had a human guise, appearing as Victor Nefarius, Lord of Blackrock. Holding the Blackrock clan and various clans of ogres under his control, Nefarian ruled from his lair at the top of Blackrock Spire until he was defeated by champions of Azeroth. Upon the return of his father and the Shattering that resulted, Nefarian was brought back to life as a rotted abomination, and descended further into Blackrock Mountain, where he set up a laboratory full of new (and mostly failed) experiments - including reanimating his sister Onyxia. Ultimately, he was destroyed once again by Azeroth's champions. 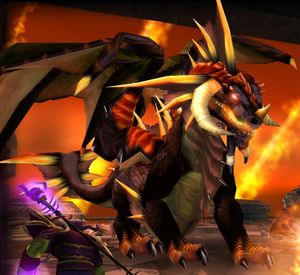 Nefarian in World of Warcraft

Since Deathwing's departure to Draenor during the aftermath of the Second War, his eldest children have arisen to lead their brethren and recoup their failing numbers. Deathwing's eldest son, the malicious and cunning Nefarian, has claimed the burning fortress of Blackrock Spire — and Blackwing Lair as his aerie as Deathwing commanded.

Nefarian has been experimenting with the blood of all of the various dragonflights to create a chromatic dragonflight of unstoppable warriors. In this task he has succeeded his father, and aided by his sister, he plans to use them to rally the Black Dragonflight to his command.

In Blackrock, aided by his loyal dragonspawn, he fights a constant battle with Ragnaros and his forces for control of the mountain, and ultimately control of the entire region. To this end, he made efforts to bolster his forces like his father Deathwing in ages past. Nefarian delights in capturing Ragnaros' elemental minions and using them for his own insidious purposes.

He has struck up an alliance with Rend Blackhand, though he only uses him and his Dark Horde to further his own goals. Nefarian's mad bid for dominance has even attracted the ire of the red dragonflight — in the form of the red dragon Vaelastrasz — which has always been the Black flight's greatest foe. Though Nefarian's intentions are known, the methods he is using to achieve them remain a mystery. 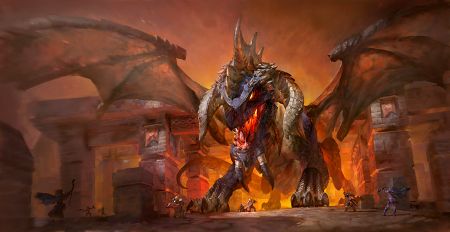 With the black dragonflight once again under solid leadership, and with the support of these new chromatic dragons, he plans to strike back against the other dragonflights, as well as the mortal nations of the world.

After his death in Blackwing Lair at the hands of adventureres, Nefarian was reanimated and charged by Deathwing to continue his insidious endeavours within Blackwing Descent.

Nefarian, the eldest son of Deathwing the Destroyer, has been bested by the heroes of Azeroth in the past, most recently in Blackwing Lair. Hubris and arrogance have ever been the great dragon's weak points - but returning from beyond the veil of death has made him cautious. Where another wyrm might strike back with brutish anger against the tiny insects who disrupted his plans, Nefarian has retreated.

Dwelling on the lessons learned from his defeat in Blackwing Lair, he has burrowed deeper into the heart of Blackrock Mountain, and rebuilt his sanctuary. The Vault of the Shadowflame, a deep pit of cascading magma, is the heart of Blackwing Descent, and the location of horrific new experiments in undeath and magical augmentation, including a triumph dear to even Nefarian's cold, wrathful heart.

He had continued his experiments along with his minion Maloriak, which yielded results such as Chimaeron, Atramedes, and the reanimation of his sister, Onyxia, until he was slain yet again by adventurers in Blackwing Descent.

The design for this encounter, which sees Ragnaros aiding the player in defeating Nefarian is acknowledged by the designers as "a total departure from [the story of] World of Warcraft."[2] However, Ben Brode considers the Hearthstone storyline to be bringing forward a rivalry that simply "didn't come to the forefront ever in World of Warcraft" due to the two characters' different placements in Warcraft lore.[2]