Sir Finley has been captured. Save him!

Lord Slitherspear is a boss found in the League of Explorers adventure. He is the first boss of the adventure's third wing, The Ruined City. 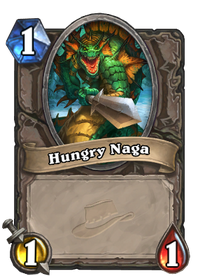 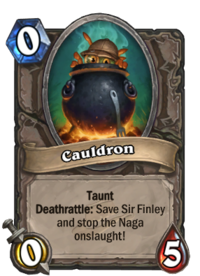 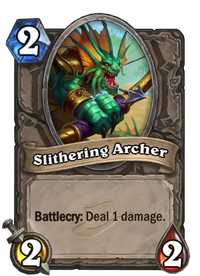 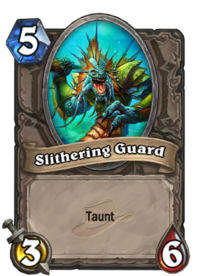 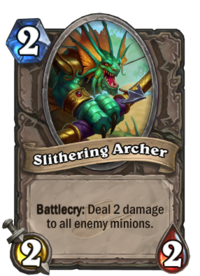 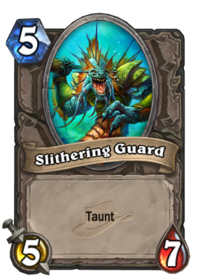 Normal mode Lord Slitherspear starts with Cauldron on his side of the battlefield.

Once the Cauldron is destroyed, a single copy of Sir Finley Mrrgglton will be placed into the player's hand, and Lord Slitherspear's Hero Power will be replaced by Enraged!. Sir Finley can be played and used as normal; destroying the minion has no special effect on the match, besides a short piece of dialogue from the murloc.

Since Hungry Nagas only have 1 health, Mage is a natural choice of class for the fight. The class has a number of 1 damage abilities, such as Arcane Explosion, as well as the Fireblast hero power, that will deal with the Nagas.

It is in the player's interest to take the board quickly, in order to destroy the Cauldron as soon as possible and change the boss' hero power to a less dangerous one. Enraged! not only costs the boss 2 mana each turn, it can also be completely shut out by freezing the boss with minions like Snowchugger or Water Elemental.

In Heroic mode, the increased health makes it much more difficult to deal with the Nagas. Since the boss' hero power is auto-cast, Saboteur is an excellent card, causing the boss to lose its hero power for a turn (or losing a lot of tempo if played after turn 5).

Between the hero power, that stays for the entire duration of the fight, and the better boss cards, it is nearly impossible to outvalue the boss in the long run. Instead, it is easier to go with an aggro deck like Face Hunter and race the boss for damage output. Explosive Trap can deal with the first few Nagas, while a few Silence effects like Ironbeak Owl will be necessary to go through Slithering Guard for the last few points of damage. 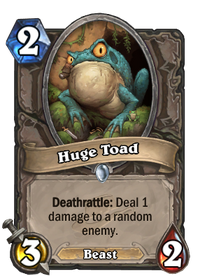 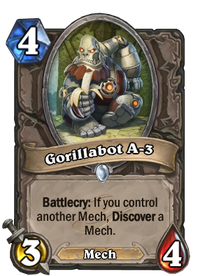 Lord Slitherspear
Dinner time! Tonight we have murloc soup!
Sir Finley Mrrgglton
Greetings, explorer. I seem to be in a bit of a pickle. Could you help a fellow out?

Sir Finley Mrrgglton
I say! It's awfully dark in here.

Sir Finley Mrrgglton
Oh, dear. Is it getting warmer?

Sir Finley Mrrgglton
This is really quite unpleasant! I must say!

Sir Finley Mrrgglton
It is definitely hot in here.

Sir Finley Mrrgglton
Some assistance would be greatly appreciated.

Sir Finley Mrrgglton
Thanks, old chap! That was much too close!
Lord Slitherspear
Get back in the cauldron!

Sir Finley Mrrgglton
You have my gratitude, explorer. Shall I lead you to the final piece?

Lord Slitherspear is original to Hearthstone. A male naga, he appears to be lord of a naga tribe, possibly the "Slitherspear" tribe.