For the minion card of the same name, see Lord Jaraxxus.

Lord Jaraxxus is a hero that the player can pick in the Battlegrounds game mode. 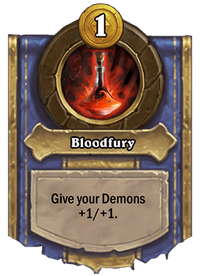 As Jaraxxus's hero power works only with Demons, picking him will effectively lock you into a Demon-based strategy. As such, luck is a major factor when playing Jaraxxus, as he'll need to quickly grab some Demons to buff them up with. With a board full of Demons, however, his Hero Power becomes very efficient and it becomes a powerful area buff that should be used as often as possible in the mid-game onward. His Hero Power is better used in builds that want to keep around multiple demons like Soul Juggler and Annihilan Battlemaster builds than Wrath Weaver/Floating Watcher decks.