For the minion of the same name, see Lord Barov.

Lord Barov is a hero that the player can pick in the Battlegrounds game mode. 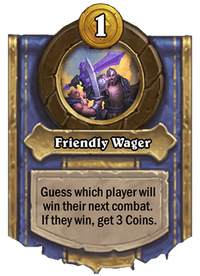 Knowing your opponent's warbands can easily give you a huge edge, as the three coins you get is well worth the gamble. Even better, in the early game you can get a power spike, because some matchups in the early game can be predictable (Characters that have a strong early game like The Curator or Rafaam over characters that gain more value over time like Alexstraza or Aranna).

General tip: use the Hero Power at the end of your turn, when you finished managing the minions. It's better to miss on a bet than to mess up a board.

Using Hero power on the very first turn is usually a mistake because of so many ties. However, if you found Deck Swabbie, play it and on the second turn use the Hero Power, knowing not only the Heroes but also their starting minions.

If you have no time to think, bet on a Hero who won last round as opposed to the one who lost. If both won or lost, bet on the one who played against the stronger opponent.

When there are odd number of players left, prefer using Hero Power in the hope of getting a match against Kel'Thuzad.