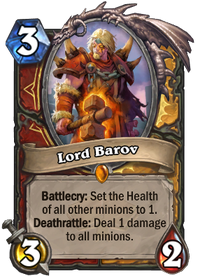 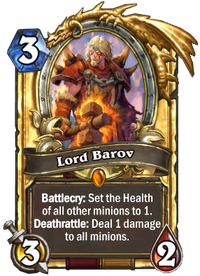 Battlecry: Set the Health of all other minions to 1.
Deathrattle: Deal 1 damage to all minions.

Alexei Barov stayed at Scholomance despite leasing it to Kel’Thuzad. He says it’s for "supervision."

Lord Barov is a legendary warrior/paladin minion card, from the Scholomance Academy set.

Lord Barov can be obtained through Scholomance Academy card packs, through crafting, or as an Arena reward.

Lord Barov is effectively a 3-mana Equality with the equivalent of a 2-mana minion attached to it. It can be used with small Area of effect spells like Consecration or Whirlwind to clear the opponent's board. He can also be used to set up good trades. In less dire situations, Barov is a decent tempo play that will threaten to destroy your opponent's minions with his own effect on the following turn. Barov works well in both midrange and control decks, although he has anti-synergy with mana-cheating cards like Commencement since he loses his Battlecry.

Paladins can use the Deathrattle left behind by Barov to clear the opponent's board a second time with Equality or Libram of Justice.

Cards such as Animated Broomstick, Sword and Board, and Hammer of Wrath can be used to destroy Lord Barov and clear the board immediately after playing him.

Summon
Do try to keep yourselves alive!
Attack
Follow my lead!

Lord Alexei Barov was the lord of Caer Darrow, Brill, Tarren Mill and Southshore. He was the father of Alexi, Weldon, and Jandice Barov and husband of Lady Illucia Barov.