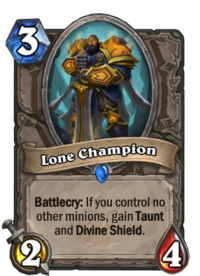 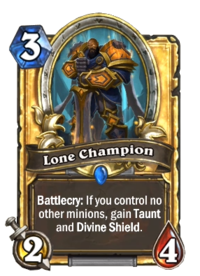 Battlecry: If you control no other minions, gain Taunt and Divine Shield.

He is a champion, with no friends. He'll keep on fighting, til the end!

Lone Champion is a rare neutral minion card, from the Kobolds & Catacombs set.

Lone Champion can be obtained through Kobolds & Catacombs card packs, or through crafting.

Lone Champion's taunt, combined with a divine shield and semi-high health, makes it a strong card against aggro. Its high tempo value makes it tempting to use Lone Champion for more aggressive decks as well, but this is not advised due to its destriction countering the game plan of tempo and midrange decks.

Summon
I don't need any of you.
Attack
For me!