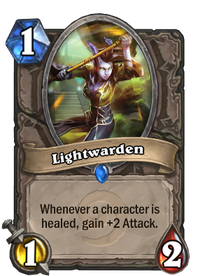 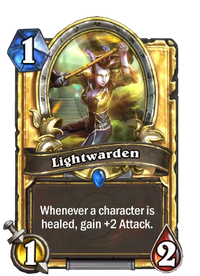 Whenever a character is healed, gain +2 Attack.

Lightwarden is a rare neutral minion card, from the Classic set.

As well as being collected in decks, Lightwarden can also be summoned by the following cards. 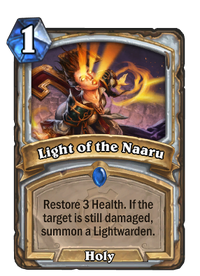 This card works well with the Priest and healing effects such as Earthen Ring Farseer, Guardian of Kings, and Lightwell. With cards that can heal multiple targets like Circle of Healing and Darkscale Healer or multiple times like Healing Rain, it can potentially gain a massive Attack boost. It's fragile, but under the right conditions it becomes devastating for the opponent to deal with if they lack the proper removal tools.

This card can also be useful in a Warlock deck, which, due to the warlock's Hero Power Life Tap, often puts themselves in a damaged state so that healing effects can activate.

Summon
In the Light's name!

Adyen the Lightwarden is a level 71 draenei quest giver located on the Aldor Rise of the neutral Shattrath City. Adyen is located at the base of the steps leading up to the Shrine of Unending Light.

He also helps during the final battle against Socrethar.