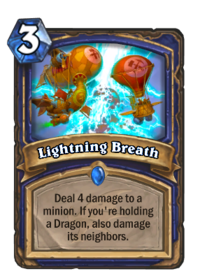 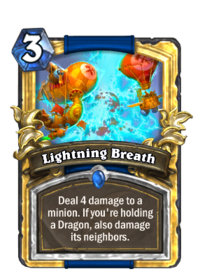 Deal 4 damage to a minion. If you're holding a Dragon, also damage its neighbors.

Lightning Breath is a rare shaman spell card, from the Descent of Dragons set.

To use this card to its full potential, it is best to run it in a dragon deck. While four damage with no Overload is good, twelve damage is better.

Lightning Breath was a hunter pet ability that increased magic damage on targets at the frontal cone of the pet by 5% for 45 seconds. wind serpents were the only ones who could use this ability.