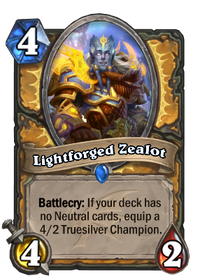 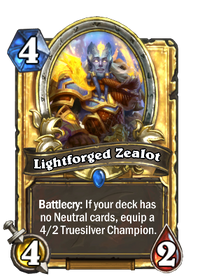 Battlecry: If your deck has no Neutral cards, equip a 4/2 Truesilver Champion.

Card-carrying member of the Paladins Only Paladin Club.

Lightforged Zealot is a rare paladin minion card, from the Descent of Dragons set. 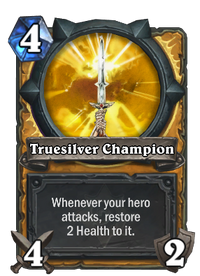 Lightforged Zealot's ability to equip a Truesilver Champion while coming with its own 4/2 body is extremely powerful for 4 mana, as Truesilver Champion typically costs 4 mana on its own and is considered to be well-worth the cost. However, the drawback to this card is its strict deck-building requirement. As such, this isn't a minion one would insert into any Paladin deck, but instead you'll need to plan your deck to be free of Neutral minions, or any cards that shuffle any Neutral cards into your deck, from the ground up.

When playing this minion, it's best to either consider it a 4/2 body with the weapon as a bonus, or as a weapon with the 4/2 body as a bonus. In other words, you can play it when you need to clear a mid-sized minion but want to gain some board presence for yourself, or you can play it when you merely want board presence and wish to save your weapon for when you need it. Lightforged Zealot's versatility opens it up to be used in a wide variety of situations.

You can combine him with Hoard Pillager for a similar effect, but, be cautious that it can void your no-neutral cards. You can put 2 more Truesilver Champion for a alternative effect, this works better since you may have 6 copies.

The light healing gained from Truesilver Champion can combo well with Paladin's other cards that are related to healing, such as Crystalsmith Kangor or Zandalari Templar.

Any deck that runs Lightforged Zealot should undoubtedly run Lightforged Crusader, another Paladin minion with the same deck-building restriction who also has a powerful Battlecry for its cost.

Sword of Justice is not able to boost this minion: Zealot replaces the weapon prior to the weapon's boosting of summoning minions.

Summon
I feel bad for you, facing me!
Attack
I'm too strong!

The Lightforged draenei are a group of draenei part of the Army of the Light and the Alliance. For untold millennia, the Army of the Light waged war against the Burning Legion throughout the Twisting Nether. The draenei most committed to their long crusade would undergo a ritual to become Lightforged, infusing their bodies with the very essence of the Holy Light. After finally achieving victory on Argus, the Lightforged draenei have undertaken a new mission: protecting Azeroth from rising threats, and helping their kin from the Alliance push back against Horde aggression. They became an allied race and pledged their loyalty to King Anduin Wrynn. 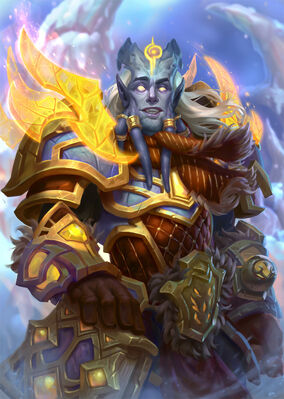