Light of the Naaru

From Hearthstone Wiki
Jump to: navigation, search
Light of the Naaru
Regular 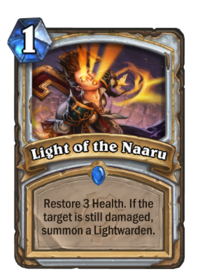 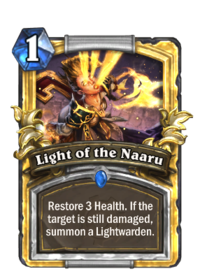 Restore 3 Health. If the target is still damaged, summon a Lightwarden.

"Light it up!" - Command given to both Lightwardens and Goblins holding Flamecannons.

Light of the Naaru is a rare priest spell card, from the Goblins vs Gnomes set. Its effect summons a Lightwarden.

Light of the Naaru can be obtained through Goblins vs Gnomes card packs, or through crafting. 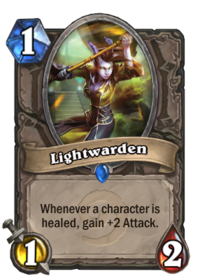 Although 3 Health for 1 mana is often a good deal, you are not using the spell to its full potential if you do not summon a Lightwarden. It is best to use this on your hero or a minion that is attacked often. You hero almost always has less than 27 Health, and will remain damaged, thus causing the Lightwarden to be summoned. High Health damaged minion such as Oasis Snapjaw are also good targets for summoning the Lightwarden.

If you are using health=damage effects such as Auchenai Soulpriest this spell will deal 3 damage, and then check if the target is damaged, so casting it on an enemy target with four or more health will always deal damage and give you a Lightwarden.

The naaru are a dimension-traveling race of living, sentient energy beings, with a deep affinity for the Holy Light of Creation that empowers the paladins of Azeroth. The naaru blessed the draenei with this power in an effort to help them in their struggle. They are bent on stopping the Burning Legion. 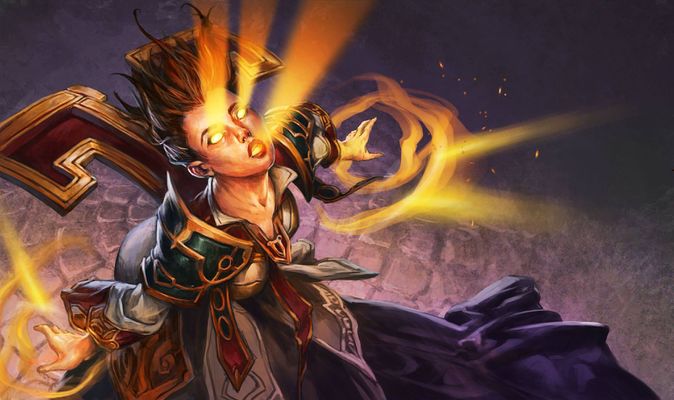 Light of the Naaru, full art