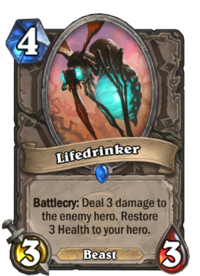 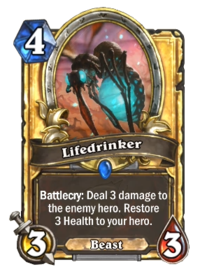 Battlecry: Deal 3 damage to the enemy hero. Restore 3 Health to your hero.

In a pinch, he'll also settle for Holy Water: Zero.

Lifedrinker is a rare neutral minion card, from the The Witchwood set.

Lifedrinker is an average midrange minion that can restore a bit of health to your hero. It's very similar to Earthen Ring Farseer, but gains 3 damage to the opponent for 1 mana and loses the ability to heal minions. While the damage is rarely relevant, it can sometimes help close out games. As an added benefit, Lifedrinker is a Beast, making it a solid option for Hunters looking for healing and extra damage.

Lifedrinker was once the key combo for Control Shaman in combination with Shudderwock. When combined with Grumble, Worldshaker and the original form of Saronite Chain Gang, Lifedrinker's Battlecry could be repeated infinitely to deal high amounts of damage to the opponent, eventually killing them.