Life Tap is generally considered one of the strongest Hero Powers in the game, due to its ability to repeatedly draw additional cards. While Hero Powers in general emphasize card advantage over the tempo of more powerful cards, Life Tap takes this to the extreme by literally drawing more cards to play. This is quite often worth the sacrifice of a few Health, although warlock players should carefully consider the strategic tradeoff, especially at low Health, making sure to consider the opponent's burst capability.

Life Tap is clearly useful for aggro decks, allowing the warlock to draw cards very rapidly, enabling them to play a high volume of low cost cards. It likewise works very well for Zoolock due to the deck's cheap minions. It is also very effective for control decks seeking to grow large hands (notably Handlock), gaining card advantage over the course of the game, drawing through the deck for important cards and combos, and also enabling hand size-related effects like Twilight Drake and Mountain Giant.

Balancing card advantage against Health, and the chances of drawing the card you need against the amount of burst damage the opponent may have in hand, is a constant challenge of using Life Tap, and one that any determined warlock player will need to master. As a rule, it is usually good to be bold about using Life Tap earlier in the game (tempo concerns aside), due not only to higher Health levels and a lower likelihood of the opponent having amassed large amounts of burst, but also to the cumulative benefits of card advantage. Drawing an extra card on turn 6 means being one card ahead for the rest of the game, effectively giving you a one turn card draw advantage over your opponent. This can allow you to draw into the cards you need before you need them - waiting until you lack the right card to use Life Tap can result in drawing the very card you needed, but without sufficient mana left to use it that turn. Make the most of chances to use Life Tap in advance of needing it, so that you don't find yourself wishing you had. Passing over a potential Life Tap risks drawing exactly the card you need... the turn after you needed it.

The most important drawback to Life Tap is often not Health, but tempo. As with all Hero Powers, the mana spent on Life Tap has relatively little immediate effect on the game, and none at all on the board, meaning use of Life Tap when you could play a card instead is often a dangerous risk to take. The balance of tempo vs card advantage depends heavily on deck type and strategy, but as a rule tempo is more critical during early rounds - Life Tapping on turn 2 is almost always a bad move, unless you have absolutely no good cards to play, or are playing a control deck like Handlock.

As with any card draw effect, remember your hand can only hold 10 cards, and take care not to overdraw due to too much Life Tapping. Try to anticipate card draw effects like your own Loot Hoarder or Acolyte of Pain, or the opponent's Coldlight Oracle, as well as your own card draw at the start of each turn, and keep your hand size down, accordingly. Frequent Life Tappers should also remember to check the size of their remaining deck frequently, especially for slower decks seeking victory in the late game. Fatigue damage rarely determines the winner of a match, but should not be invited through excessive Tapping, especially for slower decks.

As a rule: if you have room in your hand, cards left in your deck, no better way to spend your mana, and the cost to your Health doesn't put you dangerously low, use Life Tap.

Life Tap has a synergy with the signature warlock mechanic of discard effects. It can be used to refill the hand after suffering a discard effect, helping to reduce its impact, and make playing these cards more viable.

When it is not possible to empty the hand of all important cards before playing a discard effect, warlocks can also use Life Tap to add more cards to the hand, reducing the likelihood of a specific card from being discarded. For example, a warlock with a Soulfire and a Loatheb in their hand may use Life Tap to draw an Abusive Sergeant, in the hopes that playing the Soulfire will discard the latter card instead of the Loatheb. However, if an even more valuable card is instead drawn, the warlock may regret having used Life Tap before discarding.

When the dark arts call for flesh, you can only trust your own.[2]

Life Tap is a signature warlock spell that allows them to trade their health for mana - the primary resource consumed to use their abilities. Hearthstone's version of Life Tap is very similar, in this case trading health in exchange for the most vital resource of all - cards.

Life Tap is a signature warlock spell that converts health into mana. The mana restored is equal to 15% of the warlock's health.

Life Tap epitomises the character of the warlock, sacrificing a chunk of their own life in exchange for a rapid injection of power. This tradeoff can allow warlocks to produce an endless stream of damage and death - while their health holds. 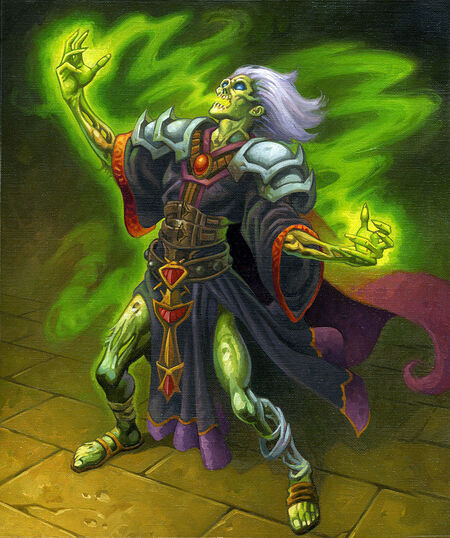