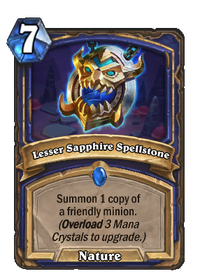 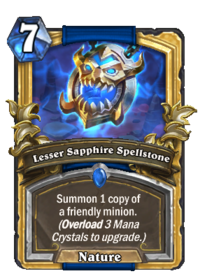 A stone of blue, embraced with glee
By murloc lords beneath the sea
Soon numberless they swarmed the shore
First two, then four, then more...and more...

Lesser Sapphire Spellstone is a rare shaman spell card, from the Kobolds and Catacombs set.

Lesser Sapphire Spellstone can be obtained through Kobolds & Catacombs card packs, or through crafting. 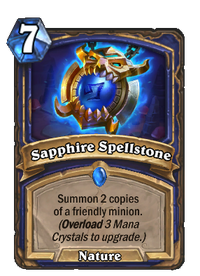 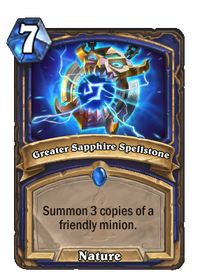 This card has a the potential to generate a massive board when upgraded. Its upgrade requirements are difficult to meet casually, so running cards with high Overload like Drakkari Defender helps.

Note that Overload does not carry over between upgrades. For example: You have a lesser spellstone that requires 1 more Overload to upgrade, and you play Lightning Storm. The Overload will be applied in full and the spellstone will be upgraded, but the regular spellstone will still require you to Overload 3.

While its mana cost is hefty, if it can be played on a big and mostly healthy minion, it's extremely valuable. The best cards to use this on are Thing from Below or Snowfury Giant since they can be reduced to costs low enough to combo with on a single turn. If you can also buff it with Ancestral Spirit or even Primal Talismans, it will create a board that's extremely difficult to remove. Spirit Echo gives you similar insurance against board clears, letting you replay your minions after they die. Big minions with passive effects are also good choices if they are left alive the next turn. For example, with Malygos, two Lightning Bolts are more than enough to kill an opponent in one turn.

This card has even more potential in Wild, where it can be comboed with Ancestor's Call after being reduced with Emperor Thaurissan, or even be used to deal 24 damage when combined with Leeroy Jenkins (after reduction by Emperor Thaurissan).