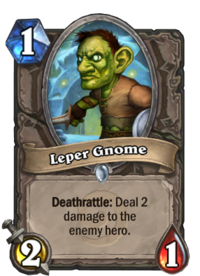 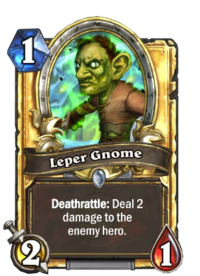 He really just wants to be your friend, but the constant rejection is starting to really get to him.

Leper Gnome is a common neutral minion card, from the Classic set.

Leper Gnome can be obtained through Classic card packs, through crafting, or as an Arena reward. 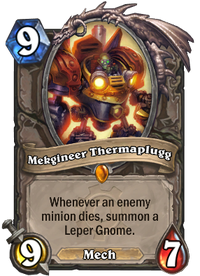 The Leper Gnome can best be thought of as a great way to damage your opponent for 2 damage when it dies. Its primary purpose is to die to inflict this damage. With 1 Attack, it may be able to deal a little damage or trade with a weakened minion before its Deathrattle triggers.

Leper Gnome's 1 Attack, nerfed from 2, makes it far less economical card than before the nerf. Its value is in its Deathrattle as it is unlikely to be able to trade for an opponent's card. If played in the early game while your opponent lacks the right cards to deal with it, the Gnome can deal a few points of damage before it is destroyed, but this should not be relied upon.

Leper Gnome may fit in an aggro deck, dealing at least 2 unpreventable damage for 1 mana, and generally requiring the opponent to invest resources in removing it lest it should deal even more. However, its weak stats makes it poor for trading and poor for board development.

Leper gnomes are a diseased, twisted, and mutated race of gnomes who wander through the irradiated halls of Gnomeregan. Their minds left crazed by the irradiation of their city, the leper gnomes will attack any who dare enter their city, believing them to be trogg invaders.

When Gnomeregan was invaded by a horde of troggs unearthed from the Uldaman excavation, High Tinker Gelbin Mekkatorque ordered the opening the pressure valves of their giant, grinding machines and released toxic radiation (via an exploded radiation bomb) throughout the city. Many more gnomes were killed than troggs when Gnomeregan was flooded with radiation. Forced to flee to the safety of the dwarven capital of Ironforge, Mekkatorque had to deal with the guilt of his actions that day, actions brought on by his chief advisor's lust for power.

Even worse, though, many gnomes still within Gnomeregan's halls became horribly mutated and insane, changing into what are now known as leper gnomes. Leper gnomes vaguely resemble normal gnomes. Emaciated and sickly, their skin is bloated and green with gangrene, while their eyes glow with a color and light similar to that of the radioactive pools in their once beautiful city. Even worse than their physical mutation, though, is the perverse madness caused by the poisoning that twisted their bodies. While individuals among them may seem saner than others, all are irrevocably twisted. Leper gnomes claim Gnomeregan as their own, and, led by Mekgineer Thermaplugg, defend its halls with horrible constructs and their own prowess. They continue their battle against the troggs, who are more dangerous now due to the radioactive goo that clings to their rock-like skin. Perhaps the worst enemies in their minds, are true gnomes, whom they blame for their current existence. They regard High Tinker Mekkatorque as a demon, and his followers not much better. They regard all other creatures as intruders and quickly put them down. Recently, however, some adventurers have seen leper gnomes in company with Dark Iron dwarves. Many theorize that Thermaplugg is attempting an alliance between the two underground races, in an attempt to strengthen his own forces and finally defeat the troggs.

Commentary: "Leper Gnome is powerful for its cost, finds its way into almost every aggressive deck, and requires no further deck building decisions to be effective. We’d like other 1 mana minions to be more compelling, so we’re reducing its Attack from 2 to 1."