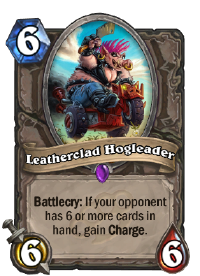 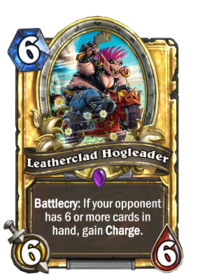 Battlecry: If your opponent has 6 or more cards in hand, gain Charge.

The Hogchoppers, the terrors of Tanaris, can always be found at one tavern or another in Gadgetzan, refueling for totally real and legit adventures that they go on.

Leatherclad Hogleader is an epic neutral minion card, from the Mean Streets of Gadgetzan set.

Leatherclad Hogleader can be obtained through Mean Streets of Gadgetzan card packs, or through crafting.

This card works well when played in a Mill Rogue deck, combined with cards such as Sap, Vanish and Coldlight Oracle, to ensure the enemy has at least 6 cards in hand.

Depending on the meta, it can also be a good inclusion as a Tech card against Handlock and combo decks.

Leatherclad Hogleader, along with her cohorts Spiked Hogrider and Tanaris Hogchopper, are "a Quilboar biker gang",[1] one of the many smaller factions operating in Gadgetzan, separate to the three main crime families.[2] Despite the historical animosity between quilboar and the Horde, two of the three bear the Horde's insignia and their vehicles appear goblin in design. The quilboar normally prefer primitive weapons and crude shamanic magic to mechanical technology, but these three appear to have embraced all that Gadgetzan has to offer.