Lead from the Front 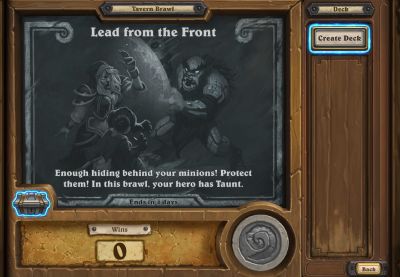 "Enough hiding behind your minions! Protect them! In this brawl, your hero has Taunt."

Lead from the Front is a Tavern Brawl. It debuted on February 17, 2015. For exact times, see the schedule. 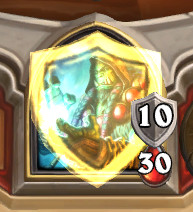 This Brawl sees players doing battle doing custom decks using any class. During the Brawl each hero has the Taunt ability, making them vulnerable to attack throughout the battle. Each hero starts the game with 10 Armor, in addition to 30 Health.

Due to the inability for most minions to trade into each other, spells and other effects that can remove enemy minions from the field - and classes that specialize in those effects - play best in this Tavern Brawl. Mage is an excellent class to run due to the class' access to a variety of powerful damaging spells such as Fireball, Frostbolt and Flamestrike, allowing the player to wipe out the opponent's field. Animated Armor is a great class-exclusive inclusion for Mages, as its presence sharply reduces the amount of damage the opponent can deal to the Mage as long as Animated Armor is not removed.

Shaman is another decent choice to run, due to the variety of cheap spells such as Crackle, Lava Burst and Lightning Storm that can deal direct damage or remove enemy minions. Tunnel Trogg benefits from the Overload effect of these spells and can quickly become a force to be reckoned with if not dealt with by means of other removal.

In general, the greater likelihood of minion survival means that this Brawl tends to favor aggressive strategies relying on quick burst damage.