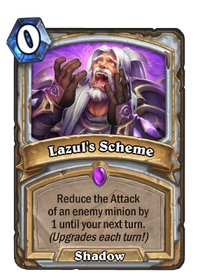 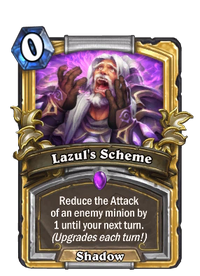 Reduce the Attack of an enemy minion by 1 until your next turn.
(Upgrades each turn!)

"What's that you're dreaming?
You're weak and you're screaming!
It must be my scheming..."

Lazul's Scheme is an epic priest spell card, from the Rise of Shadows set.

This card can help lower the attack of a high-powered enemy threat so you can kill it off without having to sacrifice any minions, acting as a cheaper Humility which takes longer to set up over time.

Many of Priest's cards, such as Shadow Word: Pain and Cabal Shadow Priest, can only target low-attack minions. As such, this can combo with them to affect powerful minions that would normally be out of these cards' reach.

Like all Scheme cards, it's a good idea to keep this card in your opening mulligan so it can be as powerful as possible when you play it.