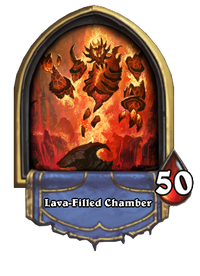 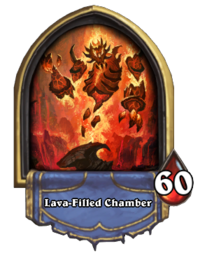 The kobolds attempted to board up this lava-filled chamber.

Lava-Filled Chamber is a boss that can be encountered during the Dungeon Run.

Refrain from playing low-toughness minions as they will be immediately destroyed by its passive Hero Power, though any Battlecries they possess will still resolve before the Hero Power triggers. Bear in mind that minions summoned through other means like Battlecries, Deathrattles, and Hero Powers are exempt from this. Having the Captured Flag bestowing a buff can result in your more fragile minions being able to survive the damage.

Be wary of its Explosive Runes Secret. It triggers after its Hero Power is applied, likely killing whatever you're playing and doing even more damage to you.

The Chamber's own Hero Power also extends to the minions it plays, which makes it easier to trade against them with what you already have. Save your single-target removal for Ragnaros as he's the biggest threat Chamber can offer. Kalimos, Primal Lord almost always spawns a board of 1/1 Elementals, so keep one Area of Effect board clear for him as well.

The Chamber's AI appears to prioritize targeting your minions with its direct damage (even going as far as using Volcano and Flamestrike against a single minion) over targeting your hero. Thus playing Wax Rager makes the encounter quite easy as the Chamber can't permanently remove it and will waste its damage spells trying. If Chamber does start burning your face, it means there are more damage spells in its hand (notably two Pyroblasts).

In conclusion, the fight benefits those who summon minions over those who simply play them from hand.

King Togwaggle
Kobolds board up lava tube, but it keep opening back up somehow.

Lava-Filled Chamber is unique to hearthstone. There are many lava rooms in Warcraft, such as the entrance to Blackrock Mountain.