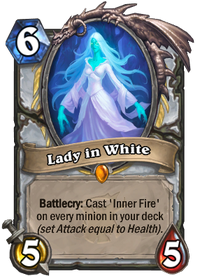 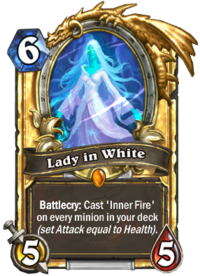 Battlecry: Cast 'Inner Fire' on all minions in your deck. (set Attack equal to Health)

She was a lady in polka dots until the gnomish laundromat incident.

Lady in White is a legendary priest minion card, from the The Witchwood set.

Lady in White can be obtained through The Witchwood card packs, or through crafting. 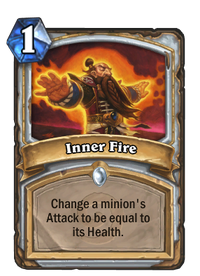 Lady in White should be used in decks that have multiple high-health, low-attack such as Northshire Cleric, Witchwood Grizzly, Obsidian Statue, Nightscale Matriarch, Deathlord, Dirty Rat, etc. to make them more powerful. Be careful with cards that have high attack but low health as it will nerf their stats. A majority of Priest minions tend to have higher health than attack, so Lady in White should not have difficulty fitting into most Priest decks.

Although you can maximize her effect by including minions with health:attack ratio in the extremes like Mosh'ogg Enforcer, using her as a win condition is unreliable because these cards will be far weaker until you can actually draw and play Lady in White and the minion must also not be drawn before playing her as well. These kinds of minions should be used sparingly for this reason.

Summon
What was lost can be found again.
Attack
Hush now.

Lady in White is unique to Hearthstone. Gilneas is a haunted city. Many of its ghosts are here to help! In life, she was a Gilnean noble woman, who saw the destruction of almost all that she loved during the fall of Gilneas. As a ghost, she seeks to help the living restore all that was lost.[1]

While the activity of restless spirits has increased sharply since the curse’s arrival, most seem to be petty, malignant things, content to rage against the living. Not so with the Lady in White, as the citizens of Gilneas have taken to calling her. The Lady has become a symbol of hope and reassurance to the citizens of Gilneas in this dark time.

Who this spirit was in life remains a mystery—if indeed she is a ghost and not something else entirely. The reports surrounding her further cloud the issue. She tends to appear only to those in deepest despair, and to each witness, she resembles a mother, sister, wife, or friend come to offer comfort from beyond the veil. Her dress is always white, though the details here differ as well; she was certainly wearing her wedding dress, claims one witness. “No, it was noblewoman’s gown,” says another. “She was a poor girl in a plain white shift,” reports a third. Regardless, one consistent element among the many accounts we’ve collected: her expression is kind, but achingly sad, and she seems to be searching for something.

Most will never witness the Lady in White, but those who have who have received her blessing have seen their spirits lifted in a most profound way.[2]