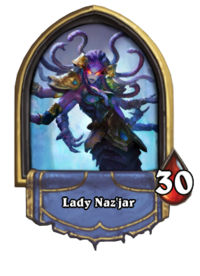 Lady Naz'jar has the final piece. The staff is within our grasp!

Lady Naz'jar is a boss found in the League of Explorers adventure. She is the third and final boss of the adventure's third wing, The Ruined City.

It is very important to have a strong early game, as whoever controls the board will gain a steady advantage. Many 1- or 2- drops are recommended. Minions with strong effects, particularly Battlecry effects, are very useful against Lady Naz'jar. Minions such as Bomb Lobber and Gnomish Inventor are very strong against Lady Naz'jar, because their stats when played will be irrelevant after the Hero Power transforms them. Minions that summon other minions are also very effective, such as Tuskarr Totemic and Echoing Ooze are also very useful, as you will gain more advantage depending on how many minions you control.

A very good strategy for this encounter is the Patron Warrior deck, which utilizes many warrior cards such as Whirlwind, Death's Bite and Inner Rage to flood the board with Grim Patrons, as well as a strong draw engine in order to get to their combo pieces. Patron warrior has a very strong early game, using weapons for removal, and can prevent losing too much tempo at the beginning of the game. After resolving a large Patron combo, all your Patrons will be buffed to other 5-mana minions, instead of 3/3 Patrons, which is a strong benefit.

Generally useful cards include Echoing Ooze, Doubling Imp, Desert Hare, Doppelgangster and Underbelly Ooze because they summon copies of themself which will turn into multiple minions of that mana-cost.

Also useful are minions that have their own cost reduced as they will transform into minions of their original cost. 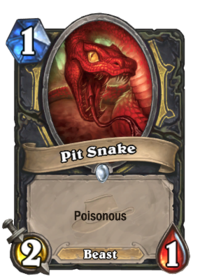 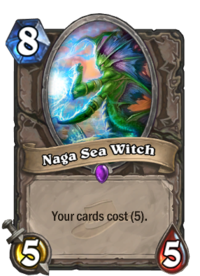 As the final boss of The Ruined City, defeating Lady Naz'jar also unlocks the following cards: 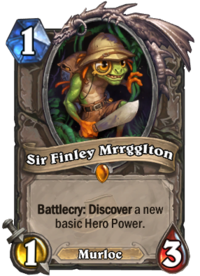 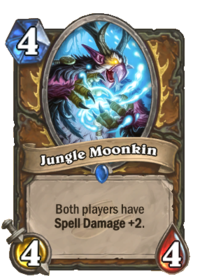 Sir Finley Mrrgglton
She has the pearl! Let's collect our prize and depart posthaste.

Lady Nazj'ar
The power of the tides will consume you!

Lady Nazj'ar
I wield the power of the pearl!

Sir Finley Mrrgglton
Elise, how fare the others?
Elise Starseeker
Reno’s back with the Rod of the Sun and Brann’s on his way.

Lady Nazj'ar
Armies of the depths, wash over our enemies as a tide of death!
Sir Finley Mrrgglton
That sounds a touch extreme.

Sir Finley Mrrgglton
Bravo! The Pearl is ours! Accompany me to the Hall of Explorers and we shall assemble the artifact together!

Lady Naz'jar is a powerful naga sea witch leading the naga invasion of Vashj'ir and the Abyssal Maw. She can be seen during the Naz'jar Battlemaiden questline, commanding the Battlemaiden to aid in the battle against the kvaldir and recover the Crucible of Nazsharin.

Due to her pivotal role in retaking Vashj'ir from the brutal kvaldir, Naz'jar earned the favor of Queen Azshara. She spearheaded an assault on Neptulon and his realm, the Abyssal Maw, and succeeded in cornering the powerful elemental lord within his throne room.

Naz'jar is the first boss in Throne of the Tides, and upon her death she implores Commander Ulthok to stop the invading adventurers.