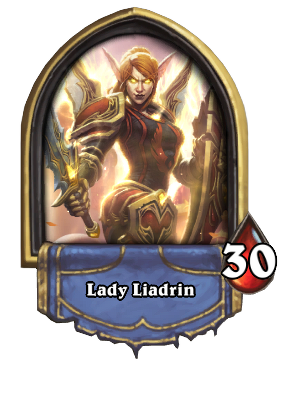 "There was a time, long ago, when I fell under the influence of treachery and darkness. I now go into battle redeemed by the purifying power of the Light! I am Lady Liadrin, and when I shine the Light's wrath upon you, there will be nowhere to hide."[1]
For the minion card in Ashes of Outland set, see Lady Liadrin (minion).

Lady Liadrin is an alternate hero for the

Lady Liadrin is the leader of the Blood Knight order. Once a priestess of the Light, she became an errant paladin and seized power from the naaru after the Scourge destroyed her homeland of Quel'Thalas. She eventually sought redemption for her people, once more embracing the energies of the Sunwell, and now stands as a bitter enemy of the Burning Legion.

Lady Liadrin (pronounced /liːɑːdrin/) is the matriarch of the Blood Knights, Silvermoon's order of blood elf paladins. Once a high priestess of the Light, Liadrin became disillusioned with her faith after the Scourge invasion of Quel'Thalas, and spent the following years honing her martial prowess against the undead occupying the Ghostlands. When M'uru was shipped to Silvermoon by the elven scion, Liadrin was summoned by Grand Magister Rommath to partake in a radical idea the magi had devised: the empowerment of Light-wielding warriors by siphoning the captive naaru's holy energies.

"My brothers and sisters, words cannot describe what I felt upon seeing the Sunwell rekindled. In that moment, the Light revealed to me the truth of the terrible things I had done. Our people had walked a dark path and mine was among the darkest of them all. But the Light showed me that I was not lost. It helped me to find the strength to survive in spite of all that had happened and all the evil I had wrought. It is a strength that we sin'dorei all share. It is a strength we will need to free ourselves of the addiction ravaging our people. It will be the most difficult battle we have ever faced, but our resolve and the power of the Sunwell will sustain us until we have been restored to our greatness." - Lady Liadrin 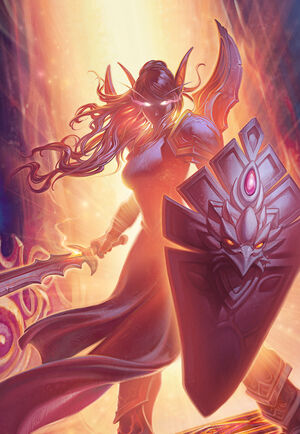 Lady Liadrin in her introductory cinematic

Lady Liadrin can be obtained for free by raising a character to level 20 in World of Warcraft. Once unlocked the player can choose to use Lady Liadrin in place of Uther Lightbringer when playing with a paladin deck.

Unlocking Lady Liadrin is not region-sensitive - unlocking her in World of Warcraft in any region should unlock her in all Hearthstone regions for that account.[3]

Note that Lady Liadrin is not awarded retroactively; players who already have one or more characters at or above level 20 in World of Warcraft must still raise a further character to level 20 in order to obtain the hero.

This promotion is free, and does not require any purchase to complete. Characters can be raised to level 20 using the game's Starter Edition, without spending any money.

It is not possible to purchase Liadrin, either with gold or real money.[4]

Once unlocked and selected for use, Lady Liadrin replaces Uther Lightbringer whenever playing with a paladin deck. Lady Liadrin comes with her own portrait, emotes, and hero tray art, as well as featuring a special animation when using Lady Liadrin's Hero Power, Reinforce.

When viewed in the Collection, Lady Liadrin has the following flavor text:

Since the restoration of the Sunwell, the Blood Knight Matriarch's mood seems, well, sunnier!
Obtained by reaching level 20 on a new character in World of Warcraft. 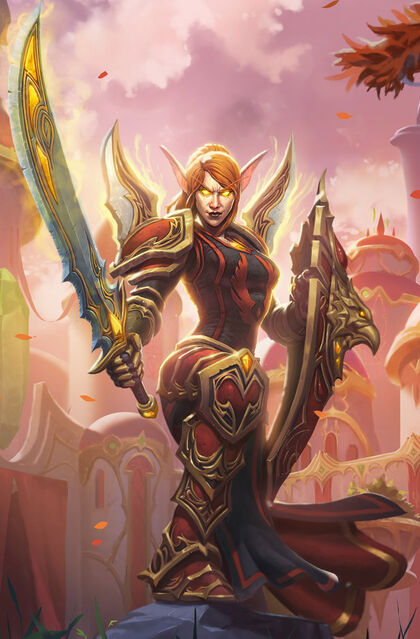