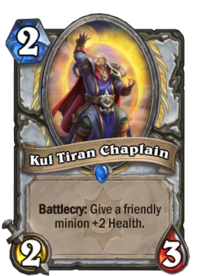 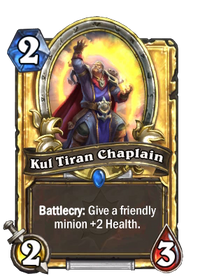 Battlecry: Give a friendly minion +2 Health.

The maritime Kul Tiran clergy are unique among priests for using holy saltwater.

Kul Tiran Chaplain is a rare priest minion card, from the Classic set.

Kul Tiran Chaplain (Core) is uncraftable and cannot be crafted or disenchanted.

A good minion to secure early board advantage. The +2 health can allow smaller minions like Leper Gnome to trade into an opponent's minion and survive. It also works well on Taunt minions, giving them a bit more survivability.

The kingdom of Kul Tiras, or the Admiralty of Kul Tiras (also spelled Kul'Tiras, and pronounced KOOL-teer-AHS) is a human nation built on the island of the same name. During the Second War, the maritime nation joined with the other human kingdoms in the Alliance of Lordaeron. Lord Admiral Daelin Proudmoore, ruler of Kul Tiras, was named Grand Admiral of the Alliance.

After the Third War, the nation fell silent with Daelin's death in a Horde assault on the city of Theramore. Its exact status remained a mystery until World of Warcraft: Battle for Azeroth. Kul Tiras is governed by four noble houses, House Waycrest, House Stormsong, House Ashvane, and House Proudmoore, and is ruled by Lord Admiral Jaina Proudmoore.

During Kul Tiras' invasion of Durotar during the events of Warcraft III: The Frozen Throne, the kingdom's forces included Light-using spellcasters called chaplains. These don't appear in Battle for Azeroth, which instead mostly depicts Kul Tiras as a nation that worships the sea and possesses a priesthood called the Tidesages, whose use water-based magic and worship a deity called the Tidemother. This card references the original Warcraft III chaplains by depicting a Kul Tiran using holy magic, albeit with clothing similar to that of a Tidesage.