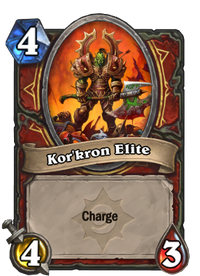 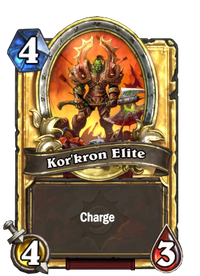 The Kor'kron are the elite forces of Garrosh Hellscream. Let's just say you don't want to run into these guys while wearing a blue tabard.

Kor'kron Elite is a warrior minion, from the Basic set.

Two copies of Kor'kron Elite are a reward for raising a warrior to level 4.

Two Golden copies of Kor'kron Elite are a reward for raising a warrior to levels 44 and 46.

Kor'kron Elite is uncraftable and cannot be crafted or disenchanted.

Kor'Kron Elite is a powerful damage dealer due to its Charge ability, being able to attack the hero as soon as it's played, or in case of emergencies, trade into another minion. Unlike most other Charge minions, Kor'kron Elite also has decent Health, making it a solid mid-game play. It can also be comboed with Attack buffing cards like Inner Rage and Rampage if held off for later turns.

Summon
For the Warchief!

The Kor'kron Guard, or Kor'kron, is an organization within the Horde. For the most part, they are seen as the elite fighting force of the Horde, serving as the personal bodyguards of the Warchief and enforcers of his command. They are stationed in many areas, including the Warchief's own fortress of Grommash Hold in Orgrimmar, and appear to be training other warriors of the Horde. They are stronger and more powerful than the city's regular guards, the Orgrimmar Grunts.

The Kor'kron were originally an elite band of orcs that served as Thrall's bodyguards. Under Garrosh Hellscream's regime, the Kor'kron greatly expanded in power, albeit narrowing its racial composition down to almost universally orcs. They served as the warchief's primary soldiers during the Siege of Orgrimmar, which ended in Warchief Hellscream's forced removal from power.