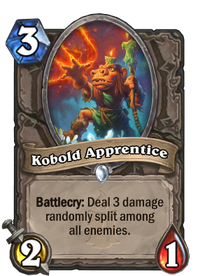 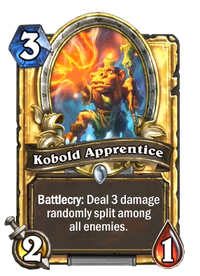 Horrible secret: The Darkness is immune to Arcane Missiles.

Kobold Apprentice is a common neutral minion card, from the Kobolds & Catacombs set.

Kobold Apprentice can be obtained through Kobolds & Catacombs card packs, or through crafting.

Kobold Apprentice is comparable to Arcane Missiles, as stated in her quote, gaining two extra Mana cost and gaining 2/1 body. However due to the lack of reliable damage, this card mostly sees play in Arena. Many class cards can do Kobold Apprentice's job more reliably, such as Shadowform, Grievous Bite and the hero powers of Bloodreaver Gul'dan, Zul'jin, and Shadowreaper Anduin.

Kobold Apprentice is best played when the opponent has many minions with 1 health, as hitting them would more likely result in a kill, rather than just damaging it. This card is also synergistic with cards/hero powers which target damage, such as Arcane Shot or Fireblast, as this gives more control to the player and decreases the chances of poor outcomes.