Knight of the Wild

From Hearthstone Wiki
Jump to: navigation, search
Knight of the Wild
Regular 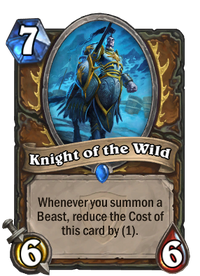 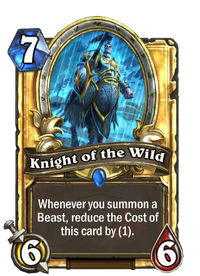 Whenever you summon a Beast, reduce the Cost of this card by (1).

He gets a discount on the tournament entry fee because he is his own horse.

Knight of the Wild is a rare druid minion card, from the Grand Tournament set.

Knight of the Wild can be obtained through The Grand Tournament card packs, or through crafting.

A good value card for Beast Druid decks. It takes 2 Beasts for its stats to be worth more than average, although the problem comes in the fact it needs to be drawn first. Cards that summon or generate multiple cheap Beast minions like Acornbearer and BEEEES!!! helps lower its cost faster.

Summon
The khan shall claim victory!
Attack
For the khans!
Death
Khaaan!

Centaurs are a half-humanoid, half-horse, war-like tribal race. They abound in central and southern Kalimdor, primarily in Desolace and the Barrens, where they engage in constant war against other centaur and tauren tribes. They are savagery and brutality incarnate.

Each tribe of centaurs is lead by a khan, who is generally a leader of above-average strength and intelligence. Some of the clans, if not all, practice cannibalism and will eat the flesh of other sapient races as well, such as the tauren.

Centaurs follow a shamanistic faith, but their brand of shamanism is far different from the more gentle practices of the Horde.

Knight of the Wild, full art