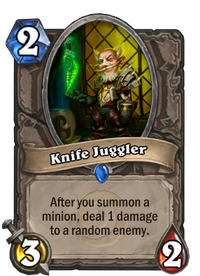 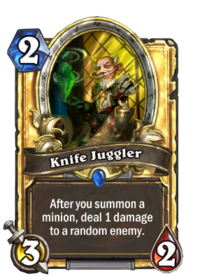 After you summon a minion, deal 1 damage to a random enemy.

Ambitious Knife Jugglers sometimes graduate to Bomb Jugglers. They never last long enough to make it onto a card though.

Knife Juggler is a rare neutral minion card, from the Classic set.

This card is a very strong card because of its special ability. Each time you summon a minion, it hits a random enemy for 1. Note that this includes all friendly summons - not only minions played from the hand, but also those generated by other cards such as Dragonling Mechanic and Imp Master. It is a powerful card in any aggro and trading decks, which tend to be based around placing lots of minions into play, often focusing on cheaper minions. You may want to buff this card to make it harder to kill in order to have this persistent effect for as long as possible.

Knife Juggler is generally considered a high priority target by opponents, what is sometimes called a soft taunt. This can easily be used to your advantage to bait out enemy removal spells if paired with a strong taunting creature. Aside from having an incredible ability, Knife Juggler is a reasonably strong minion for 2 mana and can be helpful in establishing early board dominance.

This card has notable synergy with paladin and shaman decks, as they can summon a minion each turn with their Hero Powers. It works with warlock decks to a lesser extent, since their Hero Power is in effect a built-in card draw engine, and is generally recommended for any Zoolock or Murloc deck.

Coupling this with Imp Master or Imp Gang Boss can make an excellent combo for any deck. Imp-losion provides an even more impressive burst of damage, potentially adding 4 damage to the already useful effects of that spell. This card is also good with Muster for Battle providing immediate value for that card and is even better if the tokens are buffed by a Quartermaster. If handled correctly, Snake Trap can provide similar value, although with less reliability. Note that if a Knife Juggler is attacked while the same player has a Snake Trap active, the summoning of the Snakes from the Snake Trap will cause the Knife Juggler's effect to activate, potentially destroying the attacking minion before it can hit the Knife Juggler. However, given the value and vulnerability of Knife Juggler, leaving it protected only by a Snake Trap is a risky move.

Playing Leeroy Jenkins against an opponent with Knife Juggler runs a small but significant risk of Leeroy being struck and immediately destroyed by the Knife Juggler's knives, generated by the summoned Whelps.

Summon
Put this apple on your head. 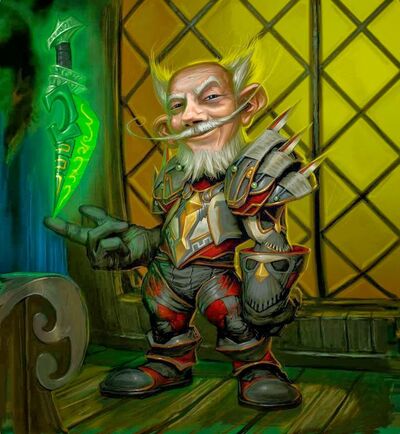 Commentary: "Knife Juggler should be a good choice in decks that play many cheap minions, but with 3 Attack, it is played almost universally. We’re reducing Knife Juggler’s Attack from 3 to 2, so this card will move into a more specialized role in the decks that include it, instead of always being among the best choices for a 2 mana-cost minion."