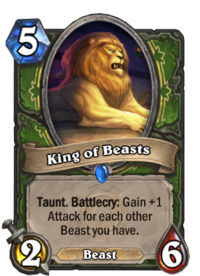 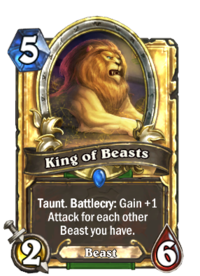 Taunt. Battlecry: Gain +1 Attack for each other Beast you have.

He never sleeps. Not even in the mighty jungle.

For the Hero Power of the same name, see King of Beasts (Battlegrounds).

King of Beasts is a rare hunter minion card, from the Goblins vs Gnomes set.

King of Beasts can be obtained through Goblins vs Gnomes card packs bought through the ingame Shop, purchased online from the Battle.net shop, or through crafting.

A perfect minion to drop after using Unleash the Hounds, or after Snake Trap has been activated, if some of the Snakes managed to survive the turn. Because the King's effect is a Battlecry, the survivability of the other Beasts is not important, making a large number of weak minions perfect for synergising with this card.

A better card for control hunter; since it has a slow effect it does not provide any instant huge impact on the field. However, the more reliable and sticky Sludge Belcher is generally a better pick for defensive purposes.

Very vulnerable to Silence, leaving a 2/6 minion for 5 mana. In comparison Savannah Highmane, if silenced, still leaves a strong 6/5 minion on the field. 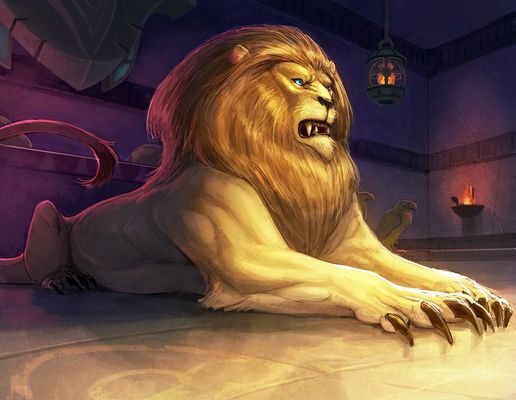