King Mukla is a hero that the player can pick in the Battlegrounds game mode. 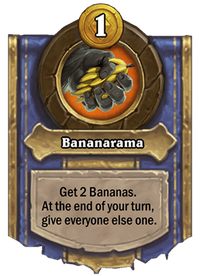 As with other raw stats buffs the King Mukla's Hero Power is better to be used either to get extra benefit from the attack bonus or to give extra survivability for a support minion. The good candidates for the attack bonus are the Cave Hydra and Glyph Guardian as well as any minion with low attack power and intrinsic Divine Shield. The candidates for survavability bonus are the Pack Leader, Scavenging Hyena, Security Rover and Soul Juggler who otherwise may die too early in the combat and not use their power to their full extent.

In the late game bananas can be given to Zapp Slywick to better snipe the enemy minions.

The bonus can also be applied in dire situations to save yourself from certain death. Your opponents get to use their bananas only on the next turn.